The Curse of Richard's Cabin 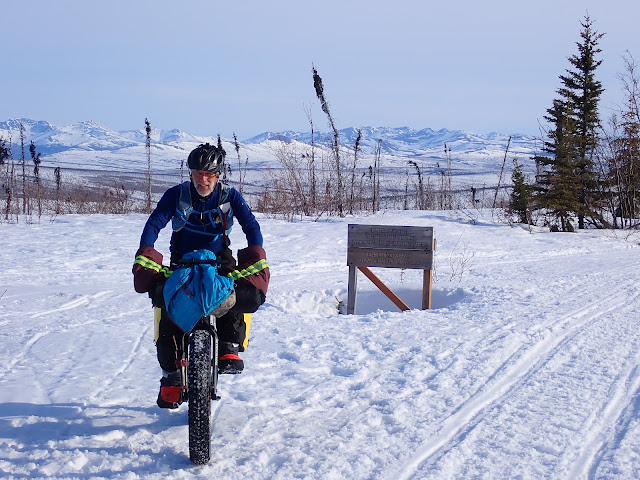 Would we get there? Finally?

This would be the fourth time that we tried to get to Richard’s Cabin in the White Mountains National Recreation Area. Each and every time we had been thwarted. Too warm and the trails had fallen apart, too cold and snowy, a family emergency, and last week, too windy.

When we cancelled our cabin trip and headed south last weekend we checked the forecast, trails report and cabin availability. It looked like it would still be freezing at night and, so far, the creek crossings were solid per BLM. Maybe we could still try to get to Richard’s Cabin? The cabin was available Saturday night, so we booked it. Now fingers crossed that we could get there and break the Curse of Richard’s Cabin. 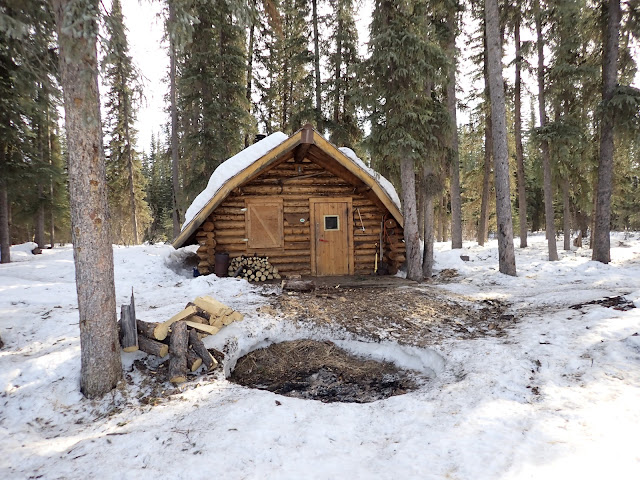 Richard’s Cabin is the only cabin in the Whites that we hadn’t been too. It is off by itself in the southeastern part of the Recreation Area. It can be accessed by way of McKay Creek Trail or Nome Creek Road. Richard’s Cabin is named after Richard Platz. The cabin was constructed as a shelter to accommodate his mining, trapping, and hunting activities before the White Mountains became a National Recreation Area. He constructed the cabin from local white spruce, and it was later refurbished by BLM. It sits nestled in the forest near Bear Creek. We really wanted to stay there but would April 23, 2022, be that day?
The forecast looked good, freezing at night (barely) with minimal wind. But daytime highs were forecasted to hit 50F! We knew we would have to get an early start as it would take 4-5 hours to get to the cabin and we (or mostly me) really wanted to avoid soft hard-to-ride-in snow. We had decided to bike by way of McKay Creek Trail, which is about an hour's drive from our home. Breaking a curse takes some sacrifice so it was a 4 AM wake up for us. We were on the trail by 6:30 AM.
The first 5 miles of McKay Creek Trail are a grunt. You just keep climbing and climbing with almost no breaks. I was worried my legs would be tired after a big ride the day before, but I was able to ride all of it cleanly just stopping a couple of times to take some photos. I got to the high point 7 miles in and took a break to wait for Eric. I waited and waited. I took some photos and waited some more. Did he have a mechanical? Was our cabin trip doomed? Should I bike back down to look for him? 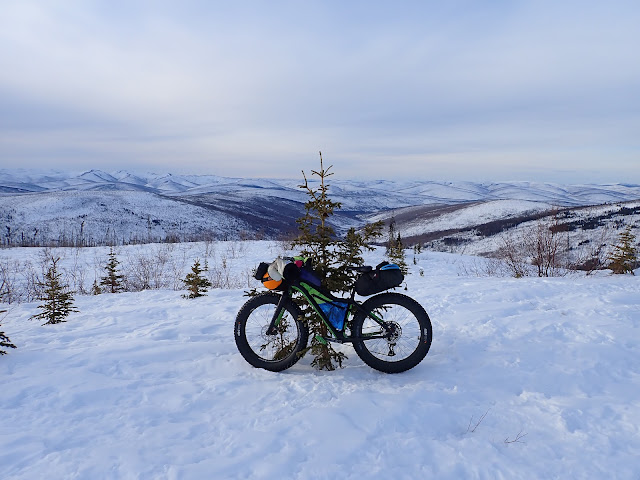 Just as I started heading back, he showed up. He had to stop for a bathroom break, stop and strip off layers, stop to tighten his back axle when it popped out and then stop to put his chain back on twice when it came off. The Curse of Richard’s Cabin was still with us, but Eric overcame all these challenges. He also doesn’t like long uphill grinds, so maybe he just took any excuse to stop and get off his bike. 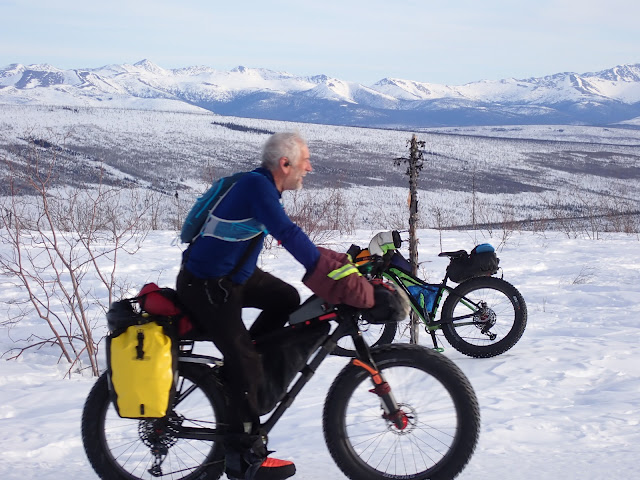 After that it was a long descent down to Nome Creek with beautiful views of the White Mountains on a new-to-us trail. We easily crossed Nome Creek--it was still solidly frozen and snow covered--and then ascended steeply to Nome Creek Road. From there, we had just 6 more miles to the cabin. Would we make it? We still had to cross Champion Creek and Bear Creek. Would they still be frozen? And it was starting to get warmer. Would the trails hold up? 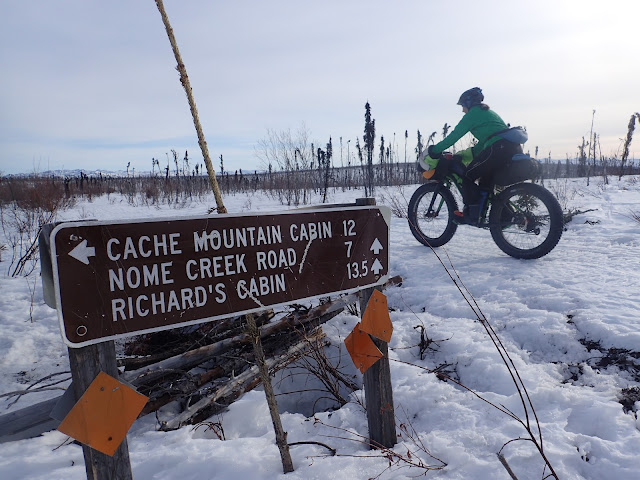 After we took a short break, we had another short grunt of a climb on the Bear Creek Trail (BLM says it gently ascends – they are wrong!) before there was another long, nice descent. This was another new-to-us trail. After crossing Champion Creek, we wound through a pretty valley going through a mature spruce forest before the final challenge, the crossing of Bear Creek. 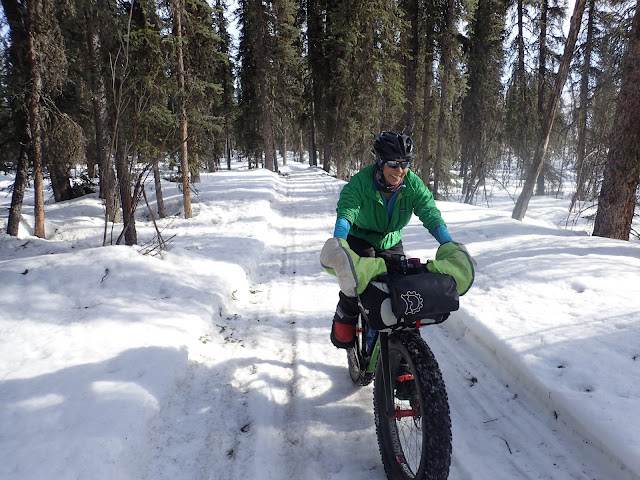 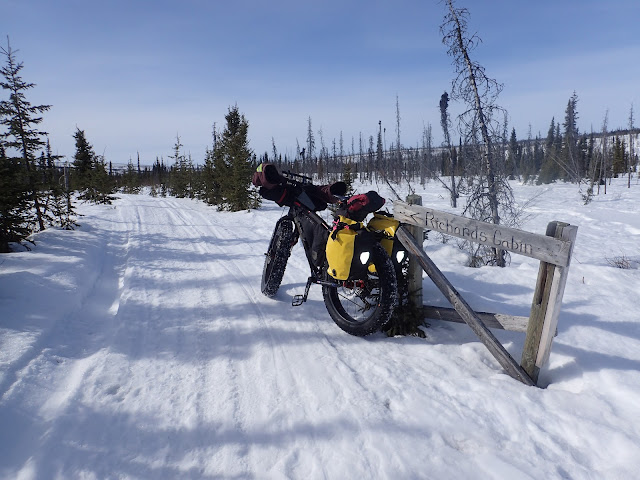 Bear Creek was also solid although there were a few small areas of open running water. A little past the creek, a sign pointed the way towards Richard’s Cabin and a few minutes later we were there. The curse was broken! We had made it! Time for a celebration!! 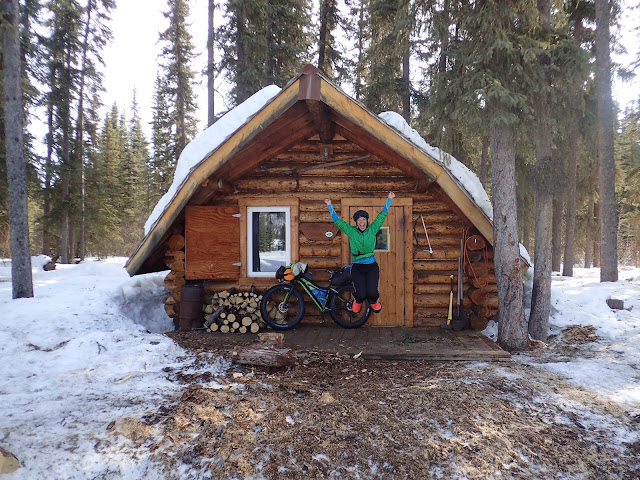 After a very short celebration, we unpacked our bags and explored a little on trails around the cabin.  Unfortunately, the temperature had risen enough that the snow was getting soft, so we didn’t get to explore as much as we wanted. After a short ride and some lunch, we cut wood for the woodstove and then just relaxed in the sunshine for the rest of the day.

A couple of groups of snowmachiners drove by, the second group stopping to chat with us. It was nice to see them, but they had paddle tracks and the snow was soft, so they definitely chewed up the trail a bit. We hoped the temperature would drop below freezing again overnight otherwise it would be a slogfest on the way out. 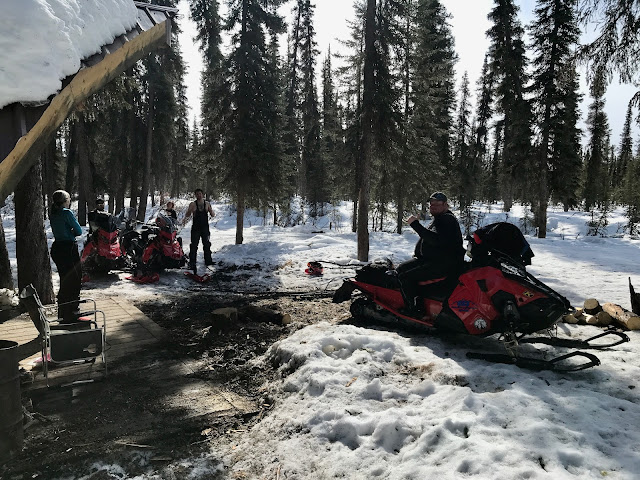 We talked over dinner, and I told Eric I wanted to get up and get going really early. Like be on the trail by 5:30 when it was light enough to see. I think Eric would have preferred to sleep in a little, but he was willing to accommodate my request with only a little eye rolling. We tried to get to bed early, but it was hard as the sun doesn’t set until 10 PM these days.
We were up at 4:30 AM, packed and on the trail by 6. Luckily, it did freeze overnight (my Garmin said 17F), and the trail set up nicely. Unluckily, the snowmachine traffic the afternoon before made for very bumpy riding on the way back. But at least it was bikeable, so we were thankful for that. 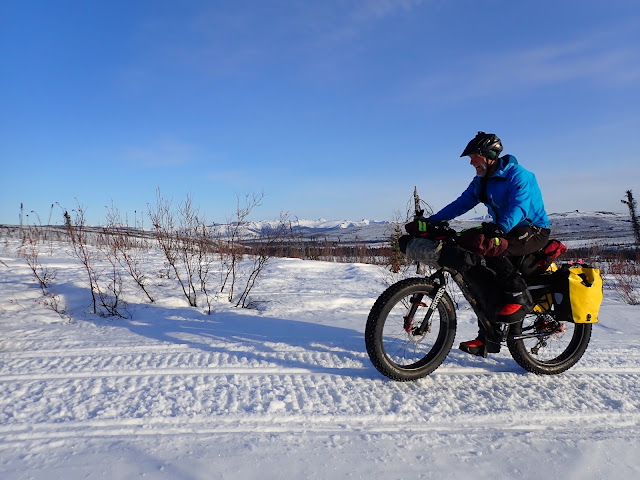 It seemed to warm up quicker than the day before and we stripped down to just our long john shirts for most of the climbing. By the time we got to the final descent it was over 40F. And this was at 9:30 in the morning! The trail got a lot softer the final 2 miles, making for some tricky riding, but we made it back to the car without any major crashes. We were both glad (me more than Eric) that we hadn’t slept in any longer. Yes, I would be tired for work tomorrow, but it was more than worth it. 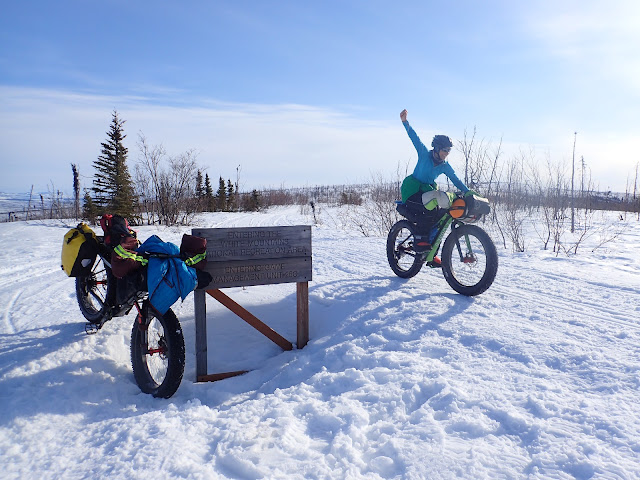 This will definitely be our last cabin trip but will also probably be our last fatbike ride of the season. As I write this, it’s over 50F and the snow is going quickly. I’m ready to be on my summer bike, though it’s always a little sad when the season is over. But at least we broke the Curse of Richard’s Cabin!

Posted by Corrine and Eric at 4:53 PM