Spring Fatbiking at Its Best! 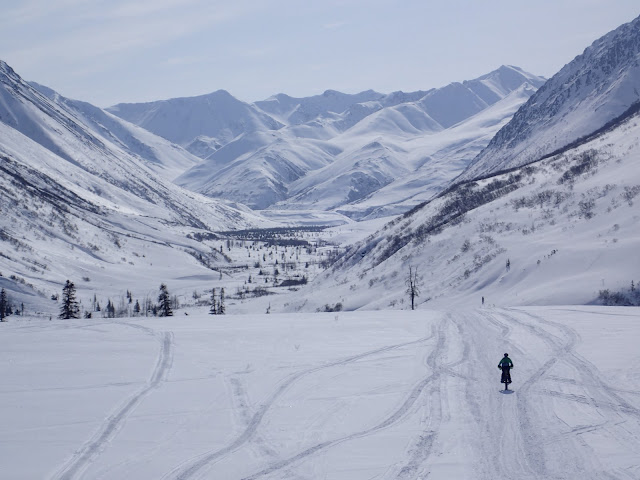 Post by Corrine
Eric and I had Denali-sized grins on our faces for pretty much the entire weekend. And why not? Great trails, sunshine, minimal wind, big mountains. What more could a person ask for? 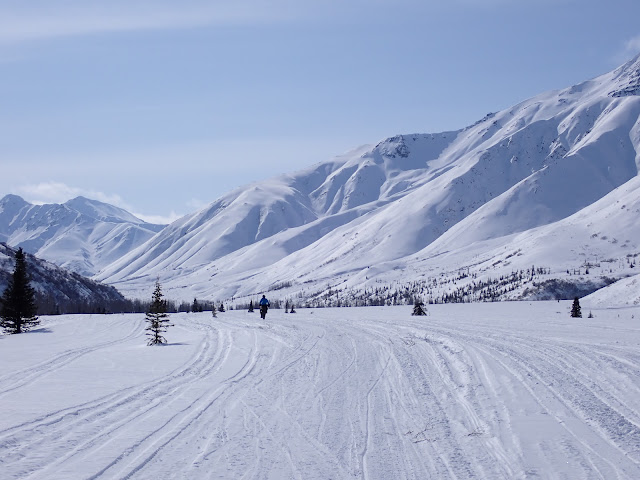 For this mid-April weekend, we had planned a trip to Richard’s Cabin – the only cabin in the White Mountains National Recreation Area we hadn’t been to, but the weather forecast changed our minds. 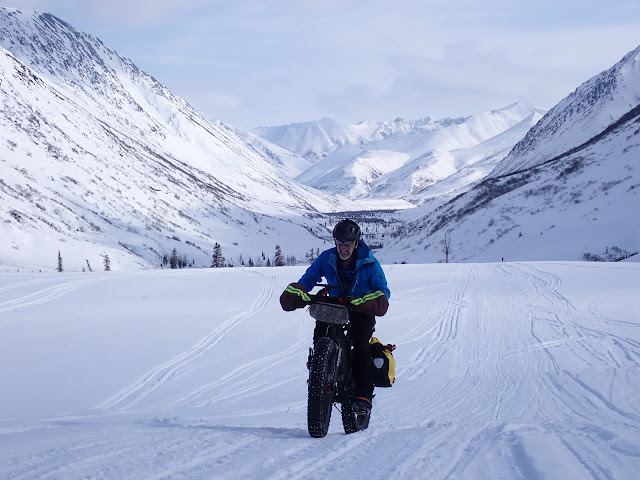 North of Fairbanks, the forecast called for 15-20 mph winds with gusts to 30 mph. On a whim, I checked the weather around Denali and Cantwell. Sunny, only 10 mph winds, and no gusts. I texted Eric from work, and we quickly decided to head south. It is rare that it is less windy down there than in the Interior, so we decided to take advantage of this anomaly. 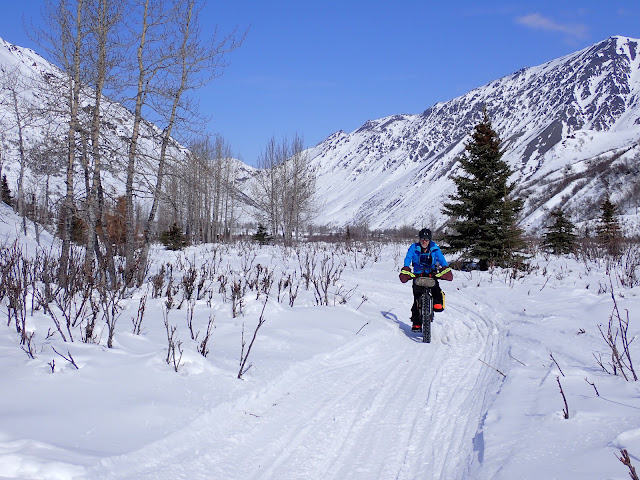 We decided to head down Friday morning. (I officially have Fridays off and sometimes it actually works out.) Our plan was to bike the Jack River Trail on Friday and the Stampede Trail on Saturday. Eric made reservations at the Aurora Denali Lodge in Healy, a good basic hotel that is relatively cheap in winter. So, we packed for staying at a hotel instead of a cabin. We are getting soft! 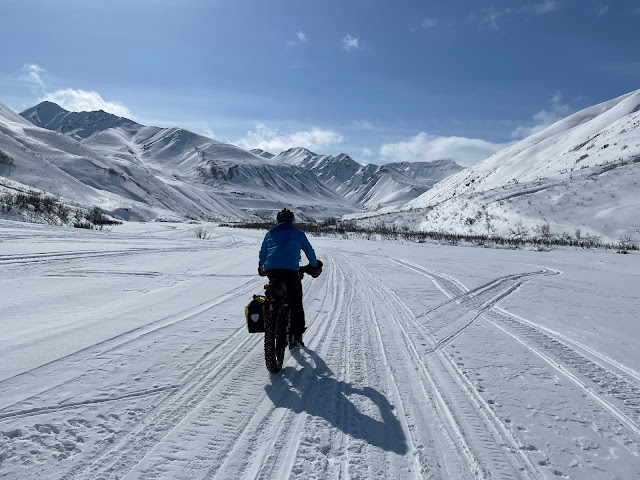 Starting a few miles in on the Denali Highway, the Jack River Trail heads south straight into a gorgeous Alaska Range pass. Several of our friends had biked it the last couple of weeks and posted amazing photos. We had heard of it before and had wanted to do it sometime. That time was now. 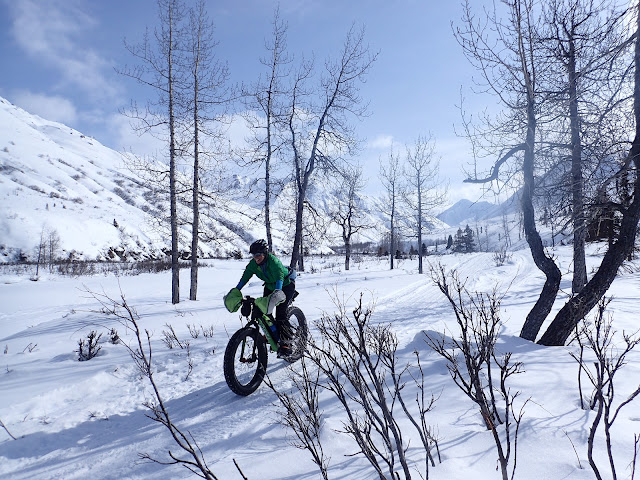 We got up early Friday morning and drove the three hours to the trailhead. (DOT stops plowing the Denali Highway there in winter, so it’s easy to find.) We were on the trail by 11 AM. The sun was shining, and it was warm but not so warm that the snow was melting. And there was almost no wind! 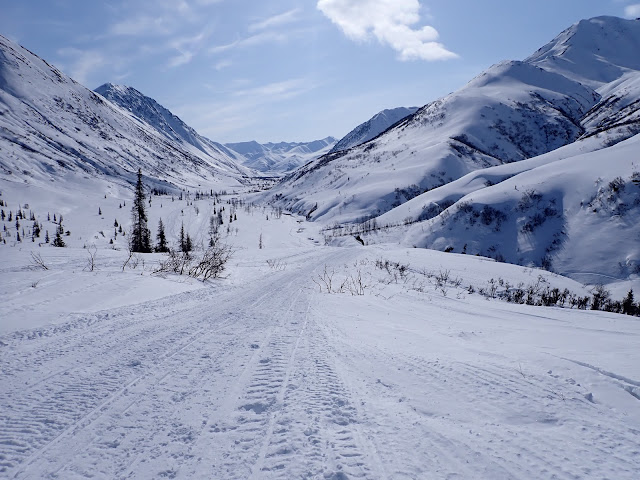 The views were amazing from the highway, and they just got better. Mountains in all directions. Blue skies all day.

The first couple of miles are a bit tricky due to some short, steep hike-a-bike climbs, and one big one over a ridge that detours around a canyon cut by the Jack River. Eric and I had once backpacked to that ridge in summer, a great place for a tent.

Once over the ridge and onto the floor of the Jack River valley, the going was much easier. For the most part, the trail gradually follows the river up the valley. We wound back and forth across the mostly frozen river, which had some open leads. We were surrounded by mountains and blue skies. There was almost no wind. It was an incredible day! I know I keep saying that, but it’s true. We couldn’t have timed it better! 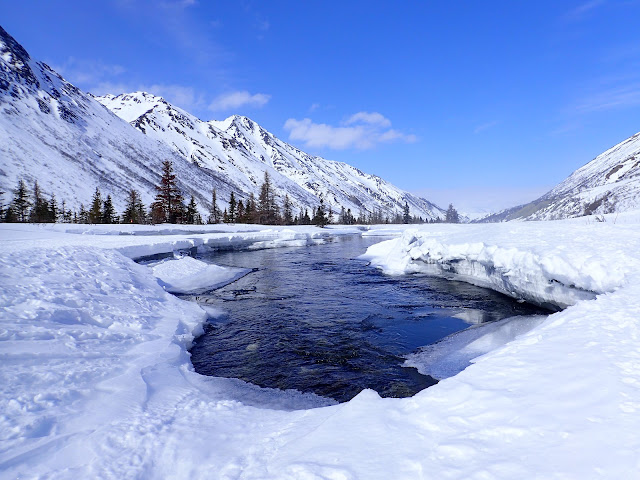 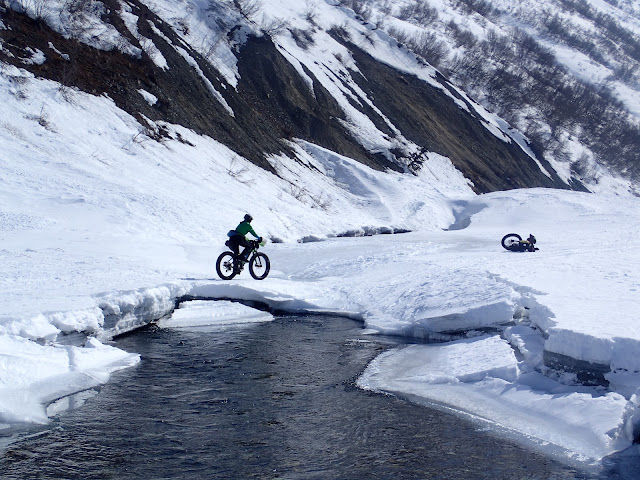 A little farther on, to avoid a tricky spot on the river, the trail diverts up a short, steep pitch that winds through some vegetation. I was pushing my bike when I looked over to see a moose standing in the brush. I think it was giving me the stink eye. I talked nicely to the moose and moved a little up the trail so that I wasn’t in its direct line of sight. Eric came around the corner and we quickly moved past it without any problem. On our way back, the moose was in the same spot but bedded down, so less intimidating. It just watched us as we bombed on by. 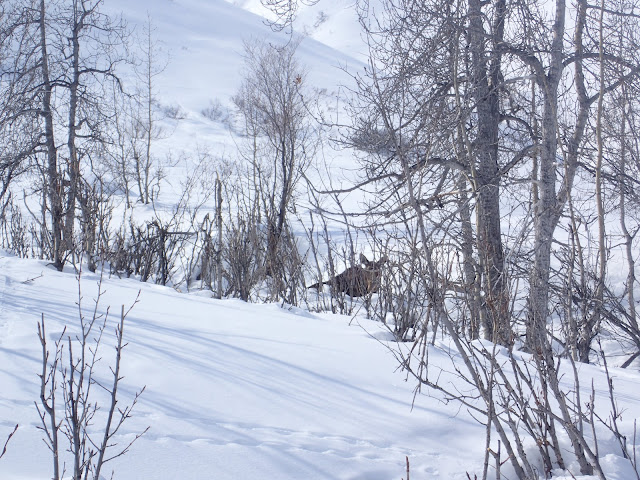 Earlier we had seen a couple of other moose high up on the hillside. The only other wildlife we saw was a covey of about 50 ptarmigan that we flushed up several times while heading back down the Jack. And we saw NO people at all, even though there had been several cars and trucks at the trailhead (which is also the trailhead for the popular Denali Highway). It was only Friday, but I was surprised nobody else was out there. We had this beautiful valley all to ourselves. 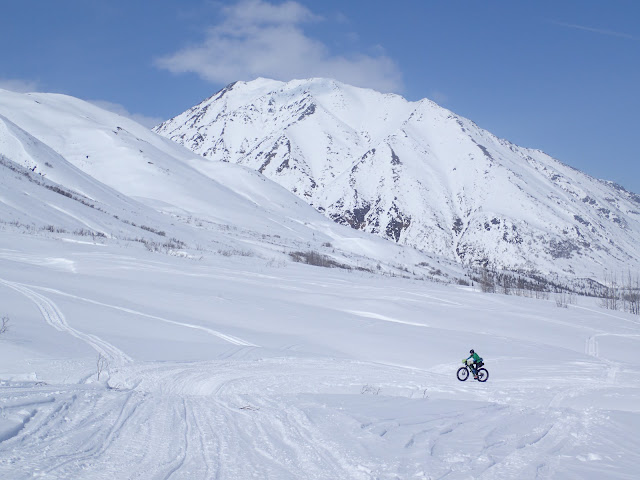 We hadn’t really talked about how far we would go before turning back, but Eric knew the river led to a wide valley that we might be able to reach. The Jack River valley narrowed and by about 13 miles in we were biking through a narrow, winding canyon with rock outcroppings. We both thought the wide valley would be right around the next corner. Eric was just on the verge of giving up when, at 15 miles in, the canyon ended, and the trail climbed a little hill. We were there! We had broken out into Caribou Pass. Snowmachine trails continued on in the valley both north and south.

I wanted to take the trail to the north. It would take us out to Broad Pass. Could we do a loop? We talked about it briefly, but we didn’t have any knowledge about that trail, and it would have meant a longer day than we had planned. A lot longer if we had had to bike all the way out to the Parks Highway and then back on that and the Denali Highway. Instead, we did the smart thing and turned around after a quick snack. 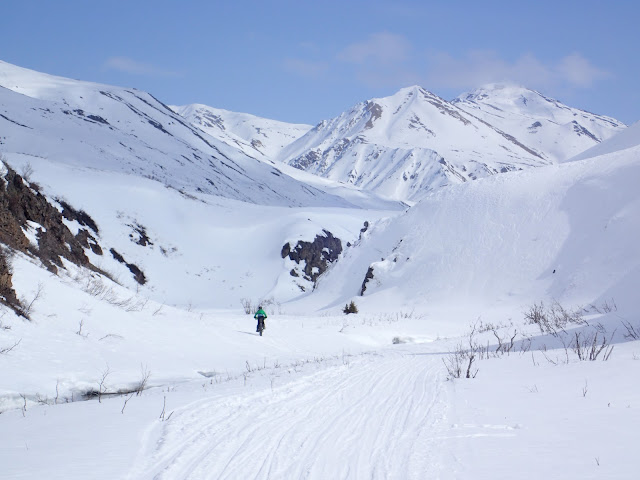 The first part of the ride down the Jack River was much quicker. On the way up we had been climbing (though the grade was very gentle) with a mild headwind. On the way back we were going downhill with a tailwind. Whee! 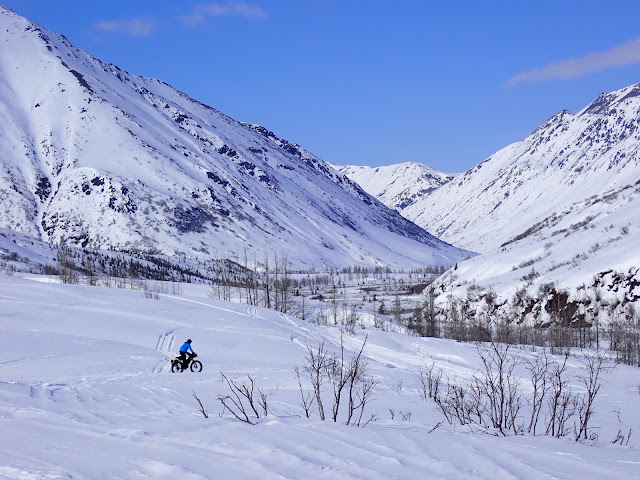 Eventually, we reached the ridge at the mouth of the valley and had to hump our bikes over it. Then it was just a short ride back to the car. At the trailhead, we saw two BLM rangers, the only people we saw on our ride. 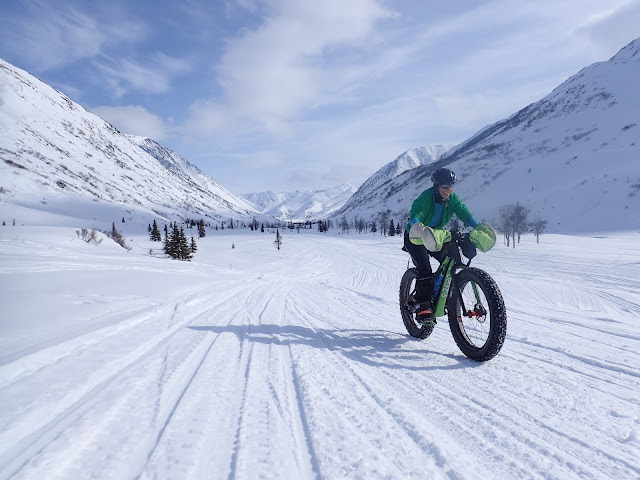 We had dinner at the Totem Inn and headed to our hotel, ready for a good rest. We wanted to start early on Saturday so we could be off the trail before it might soften up in the late afternoon. 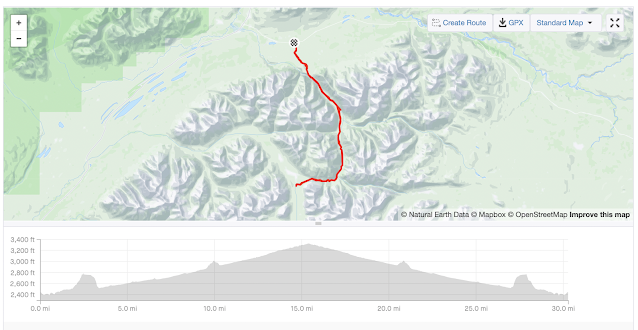 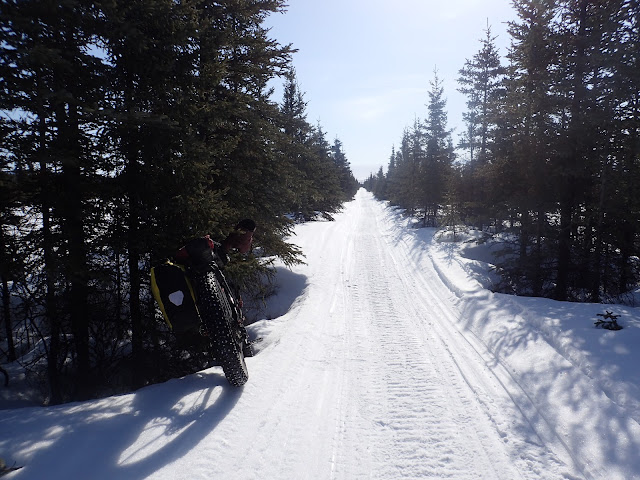 Made famous by the book and movie “Into the Wild,” the Stampede Trail used to be the home of the “Magic Bus,” where Christopher McCandless died. But the trail has been a playground and natural resource for locals for much longer. 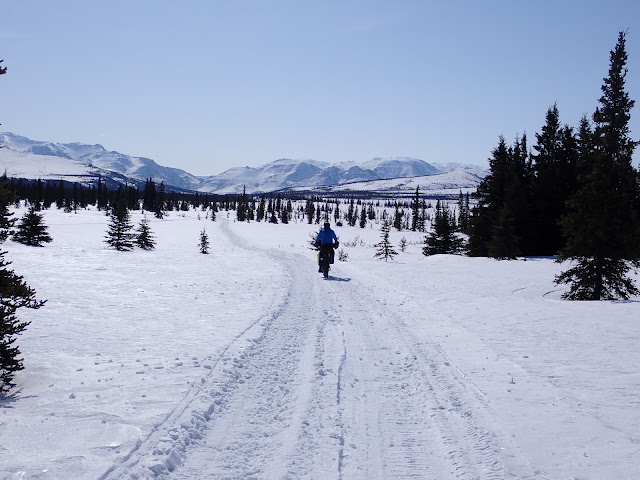 Eric had been on the trail twice years before, once on bike in summer and once on skis. Neither of us had biked it in on snow. We had the vague idea of trying to get to the bus site, though the bus had been moved by the state in 2020 because it attracted unprepared people from around the world. Several had to be rescued and a few died while trying to cross the Teklanika River. (The bus is now being restored at the UA Museum, where it will go on display sometime in the future. Learn more about that project here: 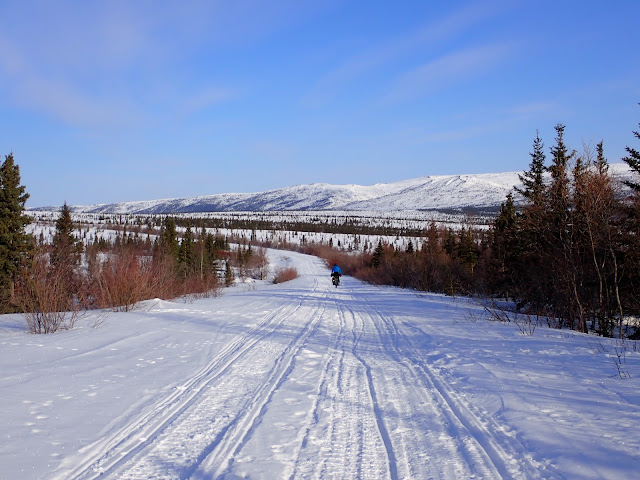 During our bike ride I thought a bit about McCandless. I think he had mental health issues, but I also think he was woefully unprepared for his undertaking. With just a bit of research and knowledge, he might have easily had his adventure without dying. (He was trapped on the far side of the Teklanika by high water, apparently unaware of how to wait for lower water or how to find easier places to cross. He either starved or accidently poisoned himself.) 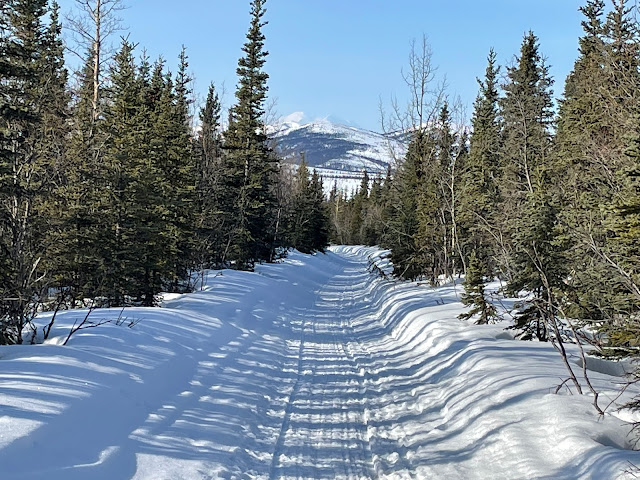 McCandless would most likely have died in relative obscurity except for Jon Krakauer’s best-selling book, which became a Sean Penn-directed movie. From those, he became an idealistic hero. I’m not quite sure why he has become such an icon for so many people. But we weren’t on some romantic pilgrimage, we just thought the site would be a good destination, even if the bus was no longer there. 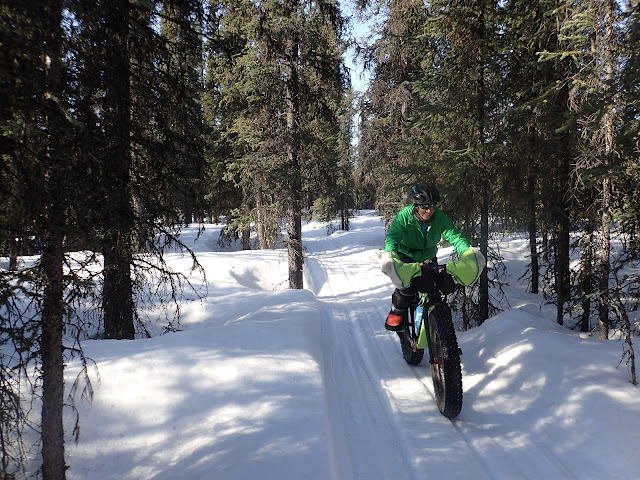 Once again, we had blue skies, minimal winds, great trails, and gorgeous views. And once again the only wildlife we saw were a couple of moose and some ptarmigan. However, the trails were a bit more “crowded” this time. We saw a few snowmachiners and one other group—three skijorers and a biker—but most of the day we were alone on the trail. 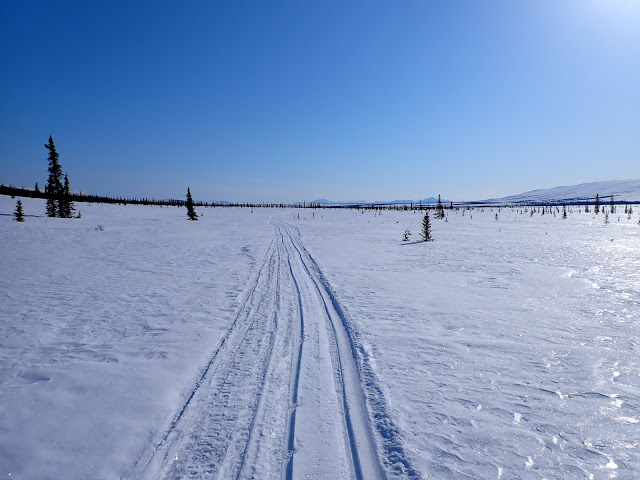 While there is one Stampede Trail, in winter there are several routes you can take that diverge from it. Some are short cuts while others take more scenic routes. We generally followed the snowmachine trails to the south on our way out. We went from wide open windblown areas to fun narrow, winding descents in the woods. There were several lesser-used side trails, but at some intersections we weren’t quite sure which was the “main” trail. In the end, it didn’t really matter. Most ended up coming back together.

One nice surprise was that we could see Denali from parts of the trail. I had no idea it was visible from the trail, and Eric had forgotten about that. 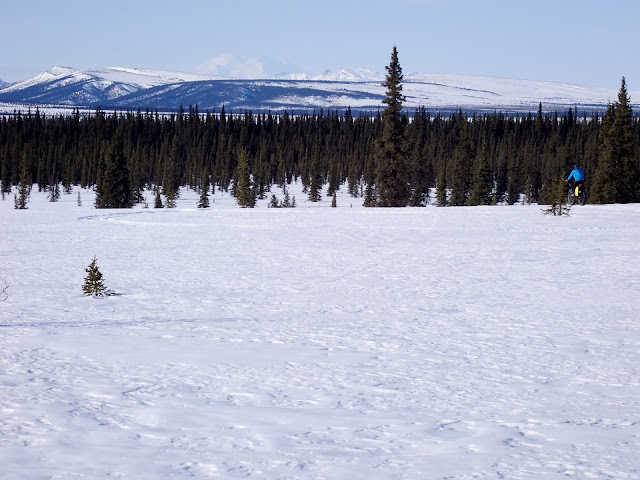 We crossed the still-frozen Savage River where we chatted with a local gathering firewood on his snowmachine. After the river we took the southern trail at the next fork, and we’re glad we did! That trail winds along a high bank of the Teklanika with lots of nice views of the river. Much of it was open and at one lookout we saw a cow and calf wading in the water. We also saw an eagle soaring high up.

Eventually the trail merged back with others and dropped down to the Tek. But that’s where the trail ended for us. We could see the trail continuing beyond the other side of the river, but there was open water in front of us. As far as we could see either way, the river was open. Ah well. We were still a few miles short of the bus site. We both had our Wiggy waders and could have crossed the shallow Tek, but we didn’t care that much. The drop from the top of the ice to the river was several feet and would have required some wrestling to lower our bikes down and back up again. We just decided it would be a good reason to come back again, maybe in mid-March next year. We headed back.
This time we took the more northerly trails. Overall, that was the shorter route, but we had a slight headwind, and it was mostly uphill. Still, we had big smiles on our faces. Our Denali biking trip had been amazing. Spring fat biking at its best. Firm trails, sunny skies, and warm temperatures. And we got to explore some new-to-us places, too. I can’t think of a better way to spend a weekend in April. 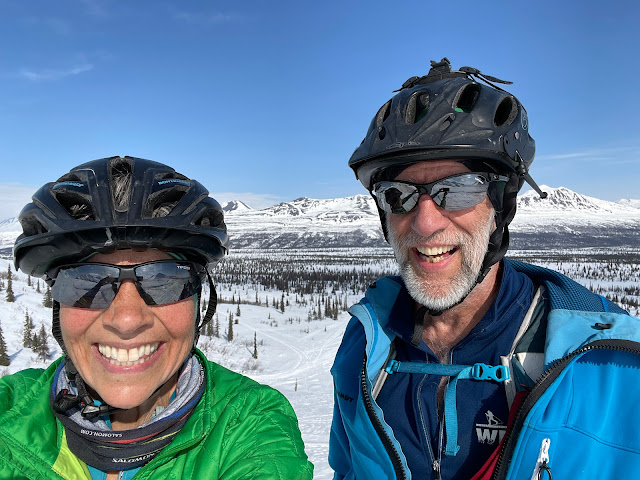 Posted by Corrine and Eric at 6:38 PM