S24O on the Mastodon Trail to Nugget Creek Cabin 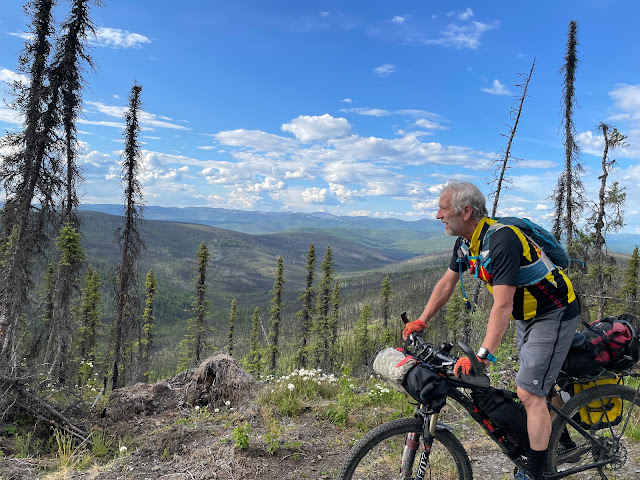 Definition: Any overnight trip lasting less than 24 hours. A term from the bikepacking community, but it can be applied to any active recreational overnighter, including but not limited to backpacking, road touring, skiing, and snowshoeing.

When you’ve got 24 hours of light, it seems like you’ve got all the time in the world. But, of course, we try to pack in an awful lot in those hours. Too much, sometimes! Before you know it, weeks have gone by, or months, or the whole summer. And while you meant to get out for a trip in the wilds, you just kept procrastinating and it never happened. What to do? 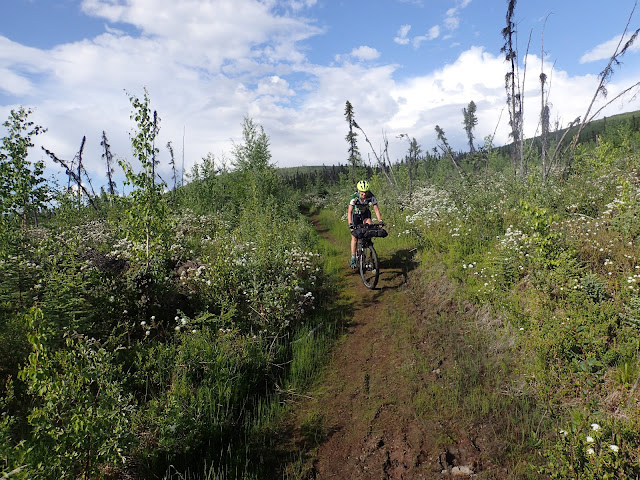 One solution is to quit thinking too big. That’s where the S24O comes in. Plan small. Get in your trips AND get other stuff done!

Last year I did a solo backpack trip to Lee’s Cabin in the White Mountains National Recreation Area around solstice, leaving after work. It’s just 7 miles in on good trails. A few years ago, Eric did a quick backpack just 3 or 4 miles up the Granite Tors trail. If you leave after dinner and decide on a cold breakfast, you can travel that much lighter.

This past weekend, I wanted to do something small since I’m tapering for my Cross Washington (XWA) Individual Time Trial which starts next weekend. Eric and I both had things to get done, too, but a short overnight could work.

I thought about the Compeau Cabin – a newer cabin that is just 2 miles in on the Compeau Trail in the Chena River State Recreation Area. Two miles isn’t much of a bike, but we could bike on other trails in the area. But then I saw on social media that the Mastodon Trail, also in the rec area, was in good shape for biking. 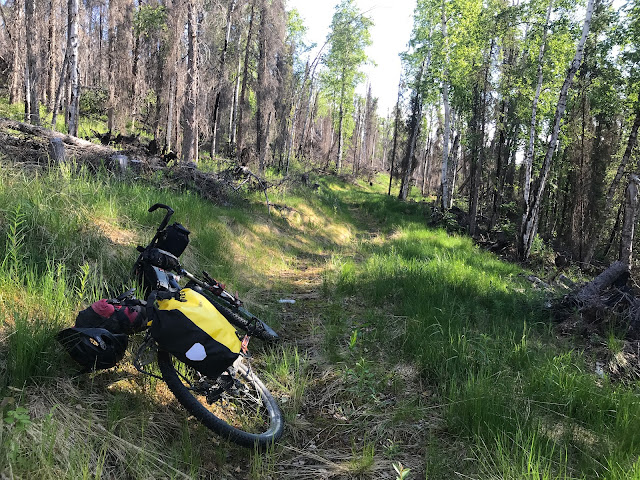 Finished in 2019, the 12.5-mile Mastodon Trail, starts at mile 38.5 of Chena Hot Springs Road. This non-motorized trail climbs a little before dropping and crossing Mastodon Creek. Then it switchbacks up through a burn area and crosses from the Mastodon Creek drainage to the Nugget Creek drainage. It follows a burned-out ridgeline above the drainage for several miles before dropping 2.5 miles down to the public-use Nugget Creek Cabin, sitting just above the confluence of Nugget Creek and the South Fork of the Chena River.
Eric and I had ridden it in early winter on fatbikes, but we had never done the whole trail in summer, so we were curious. Plus, we had never stayed at the Nugget Creek Cabin. The cabin was available for rent Friday night so our solstice S24O was a go!

But was it really less than 24 hours? Even with all the driving? Here’s how it went.

2 PM – After getting some things done in the morning, we leave home. We pick up my bike at Bankstown Bike and Ski in Ester where it was getting a final tune up before my Cross-Washington attempt. I would highly recommend Dorian Granger and his new bike shop. He does great work. We also spend time yakking with Dorian and Rolf, pack up my bike, and stop to get snacks for the road.

4 PM – We are first in line in front of two other cars when Wagner’s Pizza Bus in Two Rivers opens. We had wanted to try their pizza after hearing about it from Jay Cable, but their hours are fairly limited. The pizza does not disappoint. Neither does the milkshake Eric and I split. I highly recommend a stop here the next time you are out Chena Hot Springs Road between 4 and 8 PM. 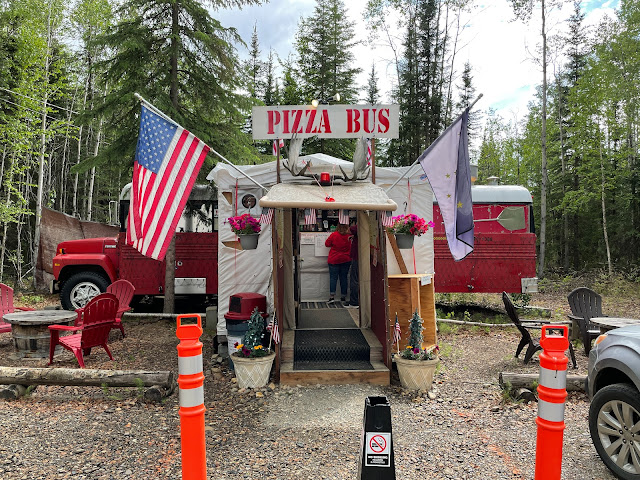 5:30 PM – We leave the Mastodon Creek Trailhead. Almost immediately I regret eating that second piece of pizza as we start up the first hill. One piece and that shared milkshake would have been enough! 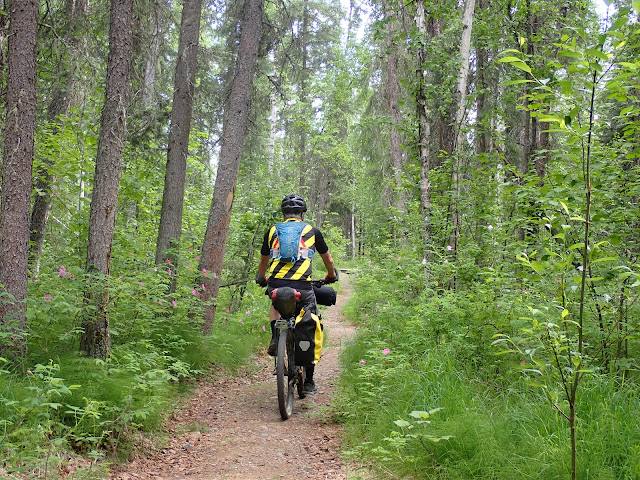 6 PM – We cross Mastodon Creek, riding through some slightly muddy but bikeable areas in the valley bottom. Then we spend time navigating switchbacks while working our way up the ridge on the other side. But the views in the burn area are expansive, and the Labrador tea is in full bloom.
6:55 PM – We finally top out on that part of the ride at 6 miles, the site of the Fairbanks Area Hiking Club bench, and admire the view.
We spend the next hour riding the ridge line above Nugget Creek, stopping to clear trees from the trail. Many toppled trees from the burn had already been cut out of the way, but a few mostly smaller ones block or partially block the trail. I move smaller trees off the trail. Eric uses his small saw to remove larger ones. We get showered on briefly while the sun continues to shine. I look for a rainbow, but no luck. We meet two backpackers, Mark, a retired radiologist with whom I had worked with for years, and his wife Pam.

8:30 PM – We reach Nugget Creek cabin after a brief stop at the newer cabin just up the hill. It sits in a sunnier area with a better view, unfortunately, it’s not ready for rent yet. The older, lower cabin is closer to the water, but the area has a ton of mosquitoes! Fortunately, only a few are in the cabin. After unloading our bikes, we walk down to the Nugget Creek-South Fork confluence to get water. The trip is quick. The bugs are even worse on the river!


10 PM – Bedtime. Lights out. Well, actually not. It’s solstice!
Midnight – I need to pee. I stumble as fast as I can to the outhouse, immediately swarmed by mosquitoes.

4 AM – I need to pee again! I stumble/run to the outhouse. The mosquitoes are still awake! The sun is just starting to rise, but the skeeters discourage me from getting my camera for a photo.

7 AM – We get up. Earlier we had debated on a cold breakfast but decided to bring a small pot and stove. We have oatmeal, leftover sandwiches, and hot drinks, then pack up our bikes.

8 AM – We start back up the trail. We holler hello to Mark and Pam who are awake but still in their tent camped up by the new cabin.

8:42 AM – I finally make it up the first 2.5-mile, 1000-foot elevation climb, the biggest of the ride out. The climb is hot and buggy, but I ride all of it. I can’t decide if I’m happy that we cleared the trees yesterday. If we hadn’t, I would have had an excuse to stop! At the top, I look back but don’t see Eric, so I keep going. Eric doesn’t need trees to find excuses to stop on long climbs.

9:30 AM – I make it back to the bench. On the way, I almost have a standoff with a porcupine. He didn’t want to give up the trail and just kept moseying toward me, finally turning around when he was less than 10 feet away. I followed him for about 200 yards before he finally scurried off the trail into the brush. About 15 minutes after I get to the bench, Eric shows up. He had stopped along the way to: 1) watch a northern hawk owl, 2) spot the cabins from different points on the ridge, 3) take pictures, and 4) do a bit more trail clearing.

11 AM – We arrive back at the trailhead. We had a lot of fun going down the switchbacks that we had climbed the day before. We take photos and videos of each other swooping down, trading off who is in front. We ride back through the boggy area and then grunt up one more climb before the final descent back. At the car we enjoy cold drinks we had stashed in a cooler and some chips. Celebration snacks! 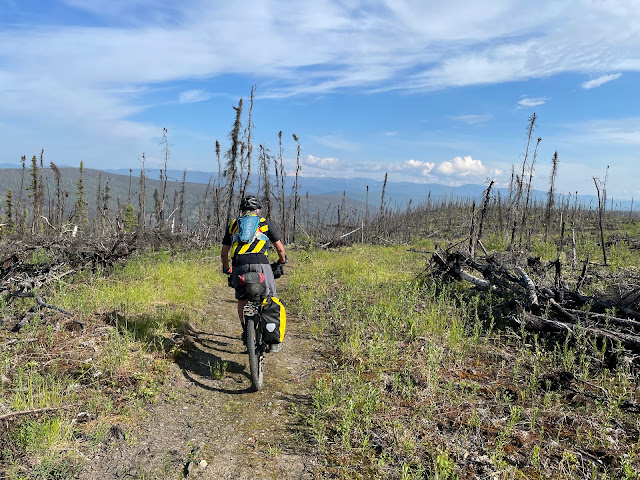 12:30 PM – We arrive home in easily less than 24 hours. We unpack, eat leftover pizza, shower, download photos, post to Strava, and still have time to relax a bit AND get a few other things done! Success!

Definition:  A way to get out there when procrastination threatens to keep you from getting out there! 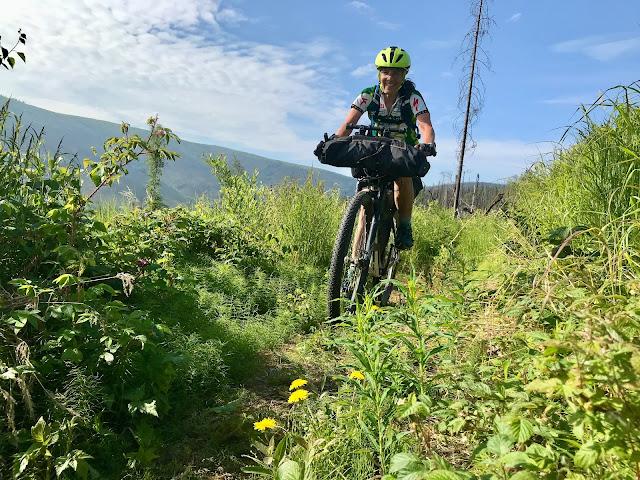 Posted by Corrine and Eric at 2:57 PM