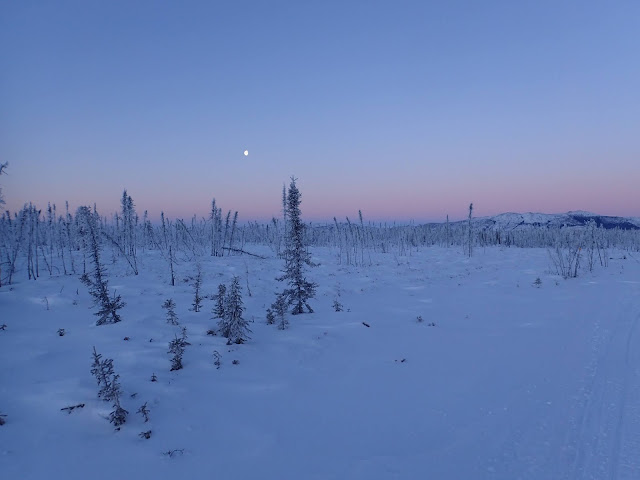 It has become an annual tradition to do a cabin trip in the White Mountains over New Year’s.  Usually, we meet up with Jill and Beat who come up to Fairbanks to train for the Iditarod Trail Invitational. And sometimes our son, Riley, will join us if he is in town. This year, due to COVID, nobody came to visit, so it was just Eric and me.  I had managed to snag Cache Mountain Cabin for January 1 and 2nd.  It is difficult to get cabin reservations during peak times like Christmas and spring break.  Thirty days in advance you have to be on your computer with everything filled out and just as it turns 6 AM, hit the reserve button.  By 6:02 the majority of the cabins are gone.  That’s how popular the White Mountain cabins are.  So, I felt fortunate to get Cache for 2 nights. 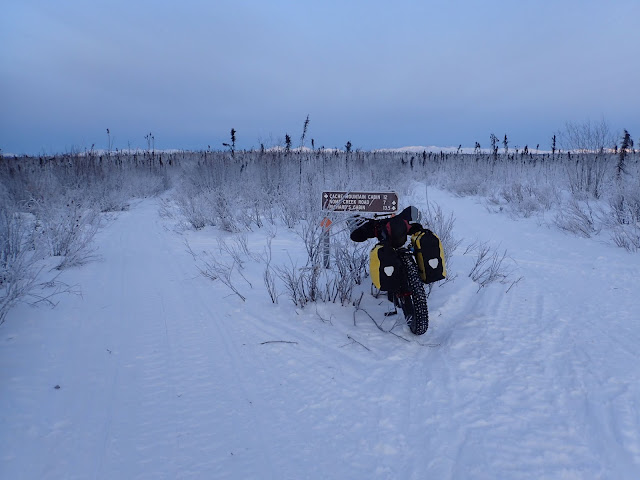 In the days before our trip, the forecast became grimmer.  Temperatures would be colder than they had been for Christmas and for our second night, they were predicting lows down to -30F with 15 mph winds so wind chills down to -50F.  That did not sound like something I wanted to do.  We have friends (i.e., Jill and Beat) who relish seeing how they do in these conditions, but we aren’t training for anything epic and -30F is too cold for me to enjoy.  After a short discussion with Eric, we decided to just head out for one night instead.

We planned to head in from the McKay Creek Trailhead, about 42 miles out the Steese Highway.  It is 19.5 miles from there to the cabin with lots of ups and downs.  We drove out early New Year’s Day as we wanted to get to the cabin before dark. The trail starts by going straight up from the parking area at a 13% grade.  Within 30 seconds I was sweating and breathing hard and it didn’t get much easier for the next 5 miles. Climb, climb, and climb some more.  It was all bikeable as the trail was hard-packed, but I had to stop and catch my breath several times.  I tend to be a slightly faster climber than Eric, so I used that as my excuse to stop frequently.  I had to stop and wait for him to make sure he was doing okay.

We passed only one other person, a hiker who was walking up to get the Trails Challenge sign at 5.5 miles.  He was moving only slightly slower than we were on our bikes.  At the trail sign we stopped for a photo op although we knew we would be back when do the Winter Trails Challenge (all in a day again).  Just after the sign, the trail drops into a valley. We put on an extra layer before bombing downhill. 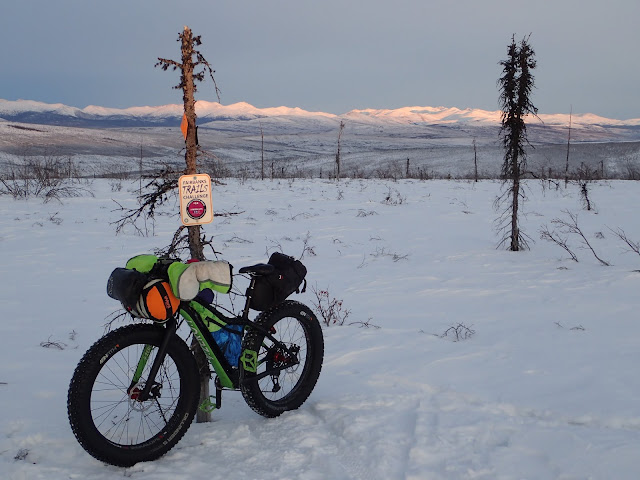 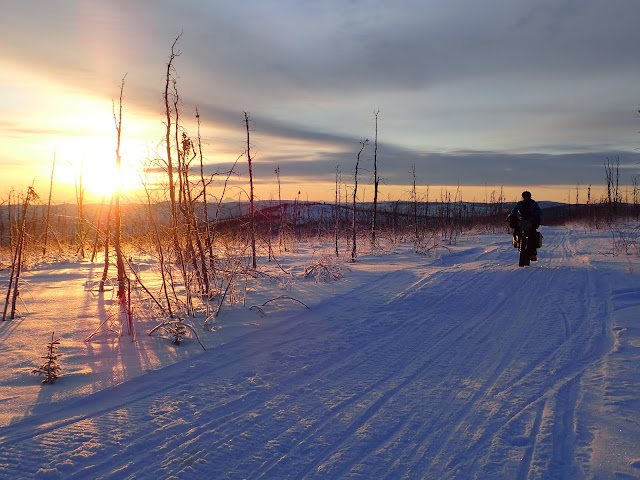 A few years ago I skied into Cache Mountain Cabin with Jill and remembered that there were some hills after that first big climb, but I did not remember how much up and down there was. The good thing is that just as you are getting cold from descending, you have another hill to climb and you can warm up again.  So I never got too cold.  We ended up climbing almost 3500 feet in 19.5 miles.  And it was all bikeable although I did choose to walk a few of the steeper uphills. 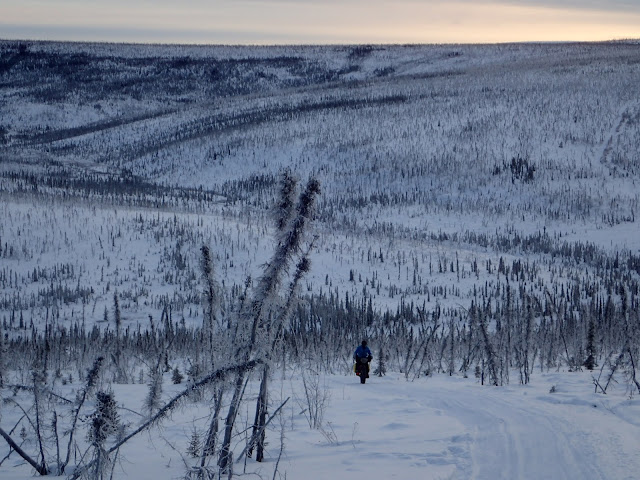 The views were opening up more as we headed further into the recreation area.  The light was astounding.  Pink in the sky, pink on the mountains.  It was absolutely beautiful.  We kept having to stop and take photos trying to catch the light just right. Photos never do it justice. 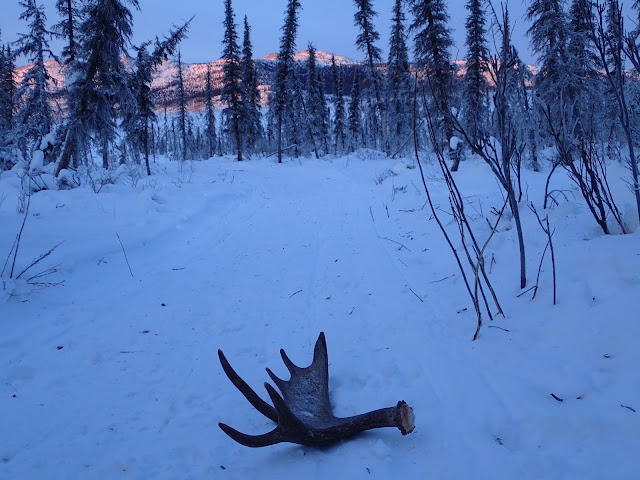 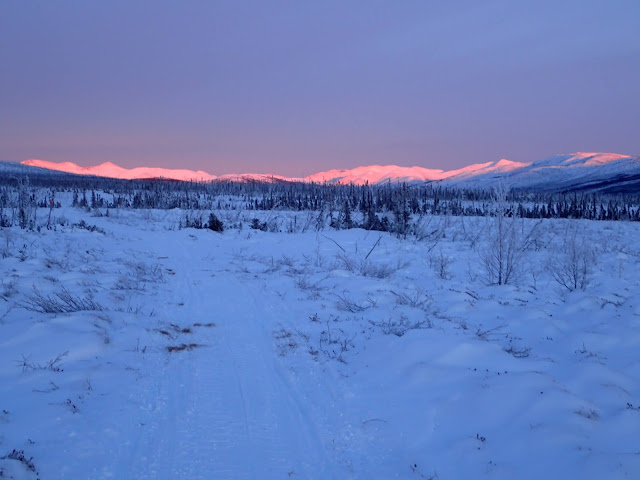 At the intersection of the McKay Creek and the Cache Mountain Loop trails, there is a sign saying the cabin is 4 miles away.  I remembered from the White Mountains 100 race that the cabin is actually much closer (2.5 miles), so I kept riding while Eric stopped to take more photos.  I wanted to get to the cabin to take some photos of it before it got dark.  The cabin sits in a valley and you have views up toward the divide.  It’s in a really pretty spot. 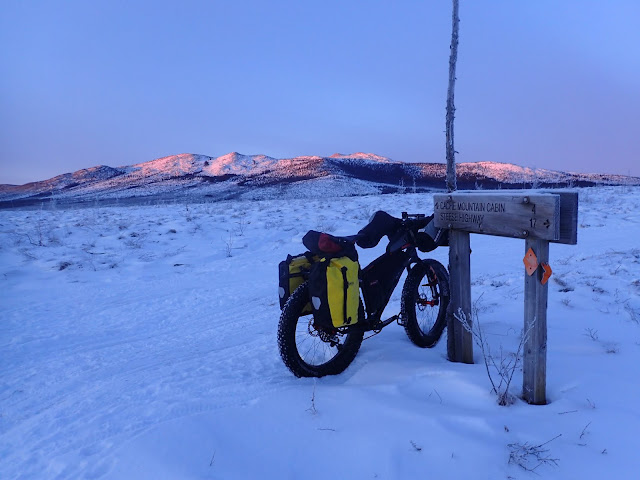 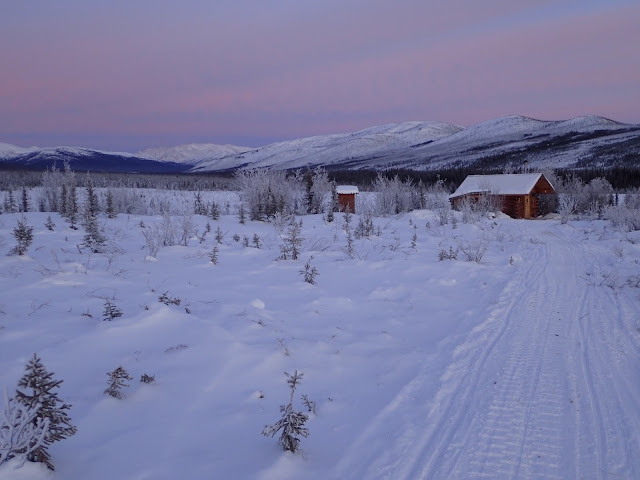 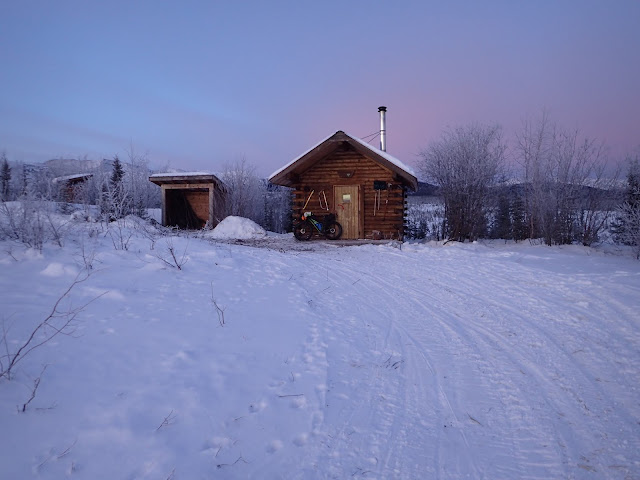 At the cabin, the previous occupants had left plenty of firewood, so I started making a fire while Eric went looking for more wood to replenish the supply.  By the time he got back the cabin was starting to get warm and I had our sleeping bags and supplies unpacked.  It’s so nice to have a warm cabin after a day out biking.  We relaxed for the rest of the evening, eating, doing crossword puzzles and reading.  And continually stoking the fire. 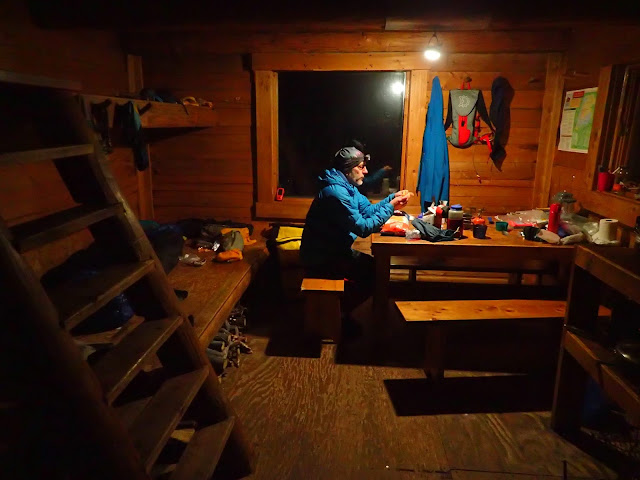 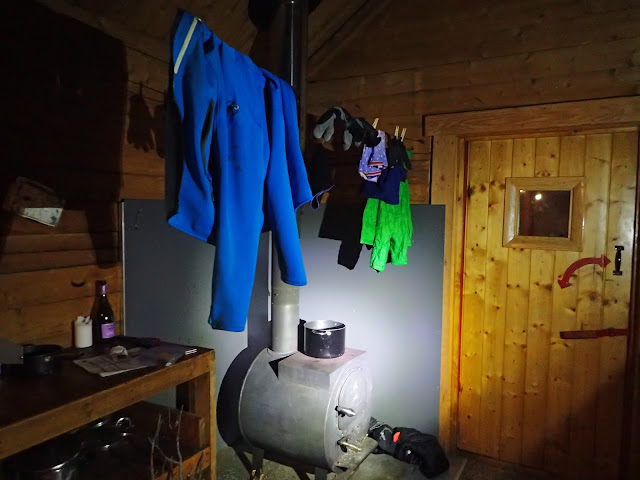 The cabin didn’t seem to be as tight as some of the other cabins, or maybe it was just colder outside but it was harder than usual to keep the cabin warm at night.  I didn’t trust the cabin thermometer, it said -20F but it didn’t feel quite that cold.  We had to restart the fire a couple of times during the night and add layers to wear in our sleeping bags. 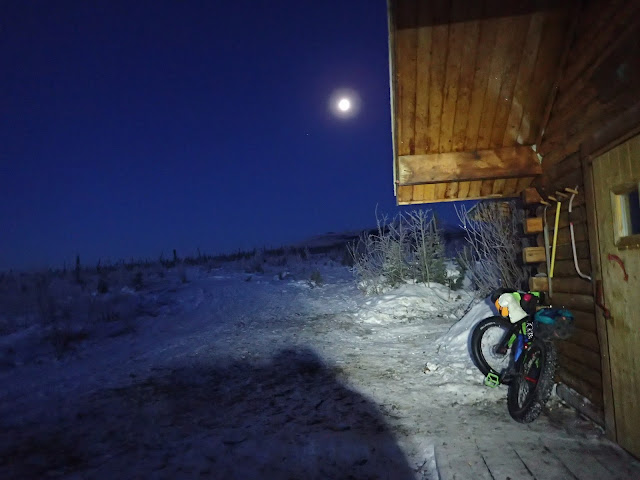 As the forecast predicted, it was colder the next morning but there was only a very light breeze.  We packed up and headed out at 9:15 AM just as it was light enough to not need headlamps. The moon was so bright.  We got to watch the sky lighten on one side and the moon set on the other. 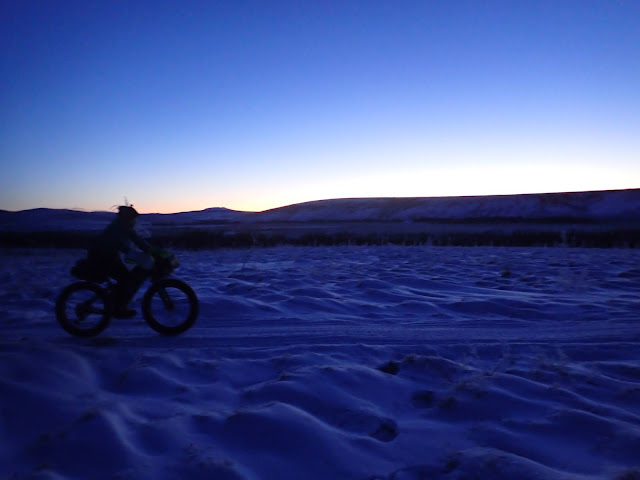 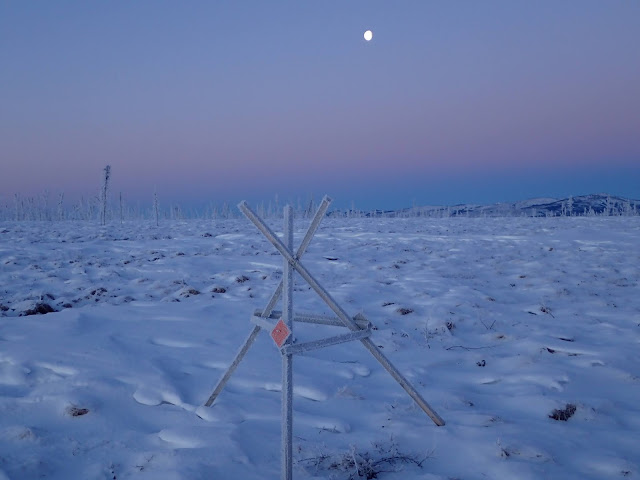 It made for beautiful riding.  There was still a lot of climbing on the way out, but it didn’t seem too bad.  My legs were a little tired, so I walked up a few pitches that I knew I could probably ride.  Plus, I didn’t want to get too sweaty.  I knew that we had those 5 miles of downhill at the end of the ride.  I was ahead of Eric for most of the ride and didn’t wait for him to catch up as I didn’t want to get cold.  He is much faster descending and he caught up to me just I got back to our truck.

We went to start the truck to get it warmed up while we unloaded our gear, but the truck was dead.  Fortunately, Eric always brings a battery pack charger for the vehicle just in case.  Unfortunately, that battery pack was also dead.  Hmmm.  I guess it was cold out there.  We aren’t sure how cold it was but probably around -20F. There wasn’t much traffic that far out the Steese, but Eric was able to flag down a car, who gave us a jump.  Whew!  Disaster averted. 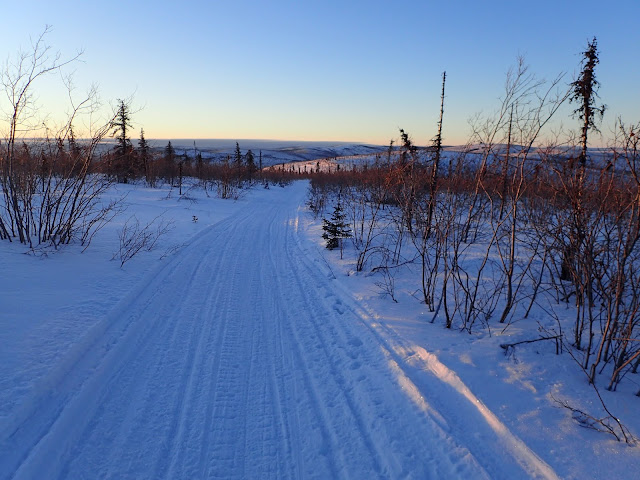 We will need to figure out a better battery charger system for next time.  Or just not go, if it’s going to be that cold.  This trip was about at the temperature limit of what I’m willing to endure. I just don’t enjoy being out all day at below -20F.  Maybe it’s because I’m getting older?  Maybe I’m just a wimp.  I know my friends think I like to suffer, but really, I don’t!  But I’m glad we did decide to go for one night.  I hope we can get out for a couple more trips this spring, hopefully with warmer temperatures.  But I doubt the trails could be much better than they were this past weekend.  All in all, it was another great cabin trip in the White Mountains. 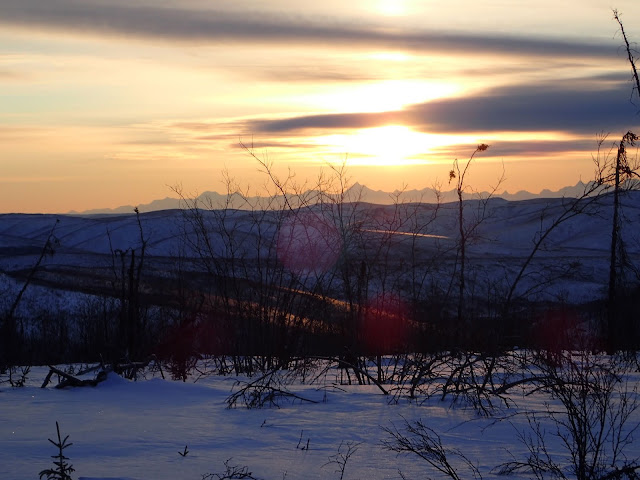 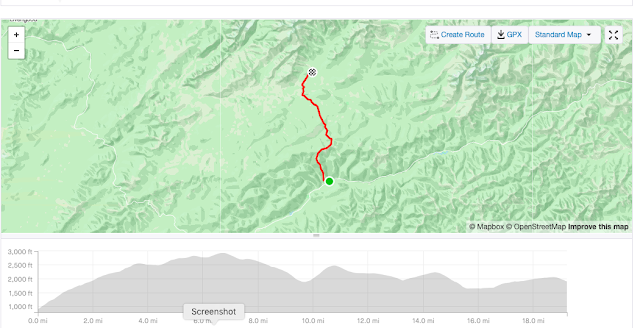 Posted by Corrine and Eric at 3:59 PM