Getting Newcomers Hooked on the Whites – A Fun Wolf Run Trip 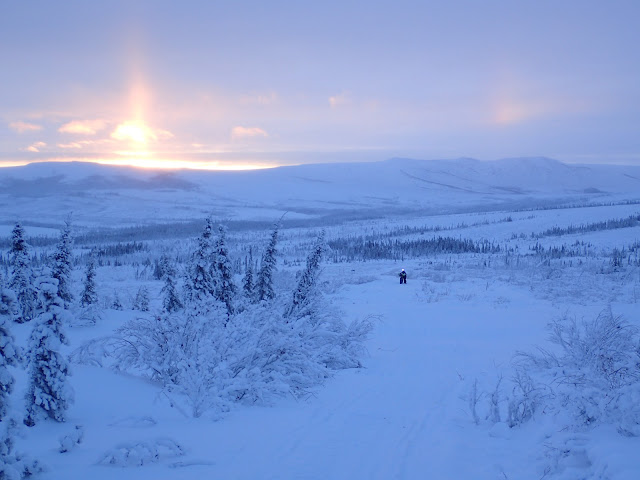 Eric and I love doing cabin trips in the White Mountains National Recreation Area. But after several years, the trips no longer include the same excitement of discovery. On a recent trip to Wolf Run Cabin, we got to experience that vicariously, and it reminded us how lucky we are to have the wonderful BLM recreation area practically at our back door. 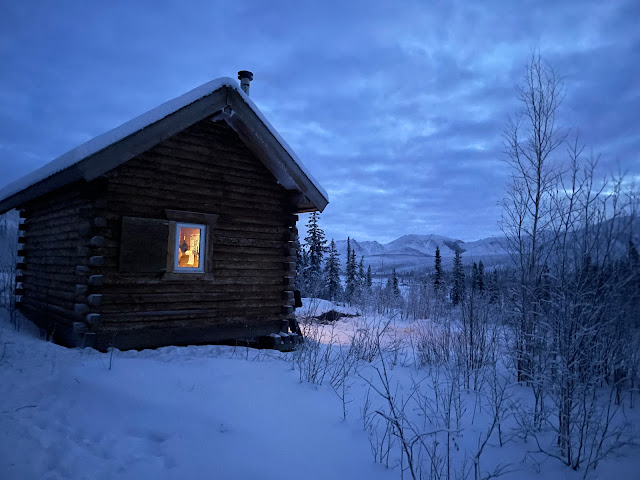 We usually do cabin trips by ourselves, but this time we decided to invite company. At first, we invited two friends, Nikki and Eyal, who are also fatbikers (or skiers if conditions are soft). Like us, they love doing cabin trips in the Whites and were excited. But then they both bailed. Nikki because she had to take her husband to the airport Sunday morning (the cabin reservation was for Saturday night) and Eyal because he had a better offer of two nights at Cache Mountain Cabin.

Oh well. On a whim, I decided to see if my work partner, Nate, and his wife Christi wanted to join us. I’d been pestering Nate to come on an adventure with us for a couple of years, but he usually had some lame excuse. This time, though, he said yes! Neither Nate nor Christi have fatbikes but they snowmachine, and Nate had just gotten a chariot to tow Dizzy, their (obviously spoiled!) one-year-old Bernedoodle (a cross between a Bernese Mountain Dog and Poodle). Nate and Christi had snowmachined in the Whites, but they had never spent a night at one of the BLM cabins. It would be fun to introduce them to cabin life in the Whites! 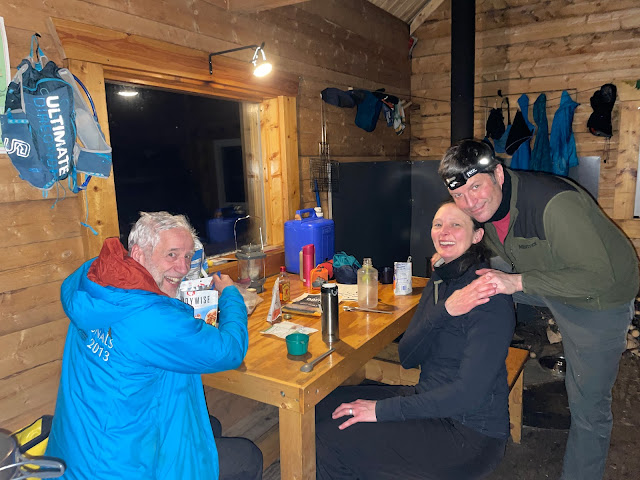 It was good we invited them, otherwise Eric and I might not have gone to the cabin. Some may think that Eric and I are tough, but we really aren’t. If temperatures are forecast to be -20F or lower, we will cancel our plans. Super windy, forget it. You will find us staying at home by our woodstove. We had already cancelled our December trips due to inclement weather. (The Wolf Run reservation was a rebooking from one of those trips.) Before we asked anyone along, I checked the forecast, and the prediction was for temperatures of -10F to +5F with winds less than 10 mph. It was a little on the cold side but not below our cut off. But we knew the conditions might be worse out in the Whites.
Eric and I left early Saturday morning. The temperature at our house was a balmy +10F, but on the way to the trailhead we watched the car thermometer fall in the valleys and rise on the summits. At the trailhead, which is in a low spot, it was a chilly -18F. Fortunately, it wasn’t windy. And the trail slowly climbs, so we knew we would warm up once we started biking. 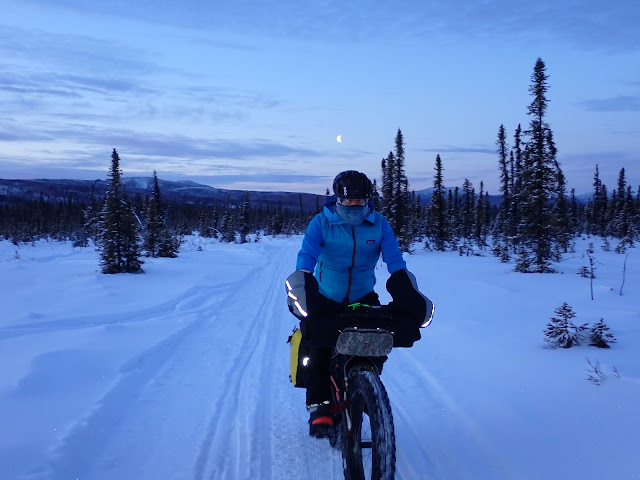 The trail was in good shape, and we made good time until we got to the open area before the climb to the ridge. The trail was windblown with drifted snow from some earlier winds, a portent of things to come. We rode over some drifts, but others were too soft. We were constantly on and off our bikes and our pace slowed. 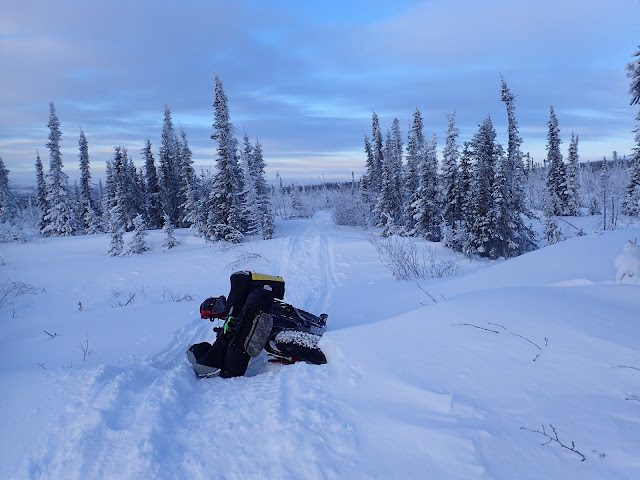 In this area, Nate and Christi caught up. (They had left town a couple of hours after us.) It was great to see them, but their snowmachines made the trail softer and slower to ride. (Overall, snowmachine traffic packs the trail nicely for fatbiking, but it takes time for churned up snow to set up again.)

Shortly after they passed us, we hit the big stairstep climb to the ridge. Several of the hills require you to get off and push. We warmed up a lot with the pushing and the temps rising as we climbed. But we also noticed the slight breeze, which had started earlier, becoming stronger. 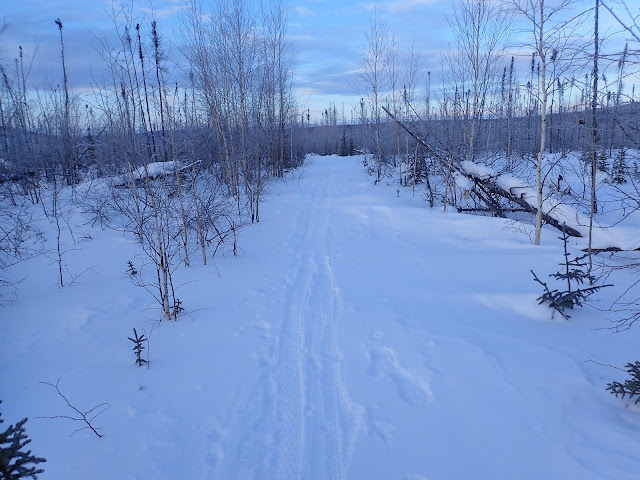 By the time we had crested the high point, it was blowing a good crosswind. We descended the other side and turned straight into that 10-15mph headwind where the trail turns to the northeast. (The Colorado Creek Cabin, less than a mile away down the Big Bend Trail, seemed really inviting right then!)

Brrr! That much wind was definitely not in the forecast! My face felt flash frozen. I quickly pulled up my neck warmer and pulled down my hat to cover most of my exposed skin. Unfortunately, Eric, who had unzipped his outer layers on the climb, forgot to zip back up quickly. His jacket zipper froze open! Fortunately, his outer vest zipper still worked, so he could cover up enough. (Later, in the shelter of some trees, he was able to fix his jacket zipper.)
Along this stretch of trail to Wolf Run, the views open up, but we didn’t stop to take many photos. We wanted to get to the cabin as quickly as we could. Give me cold over wind any day. The trail was solid, and we should have been fast since we were trending downhill, but that headwind slowed us down. Luckily the wind lessened as we dropped down to Beaver Creek, and by the time we got to the creek, just before the cabin, the wind was much better. But the temp was about -12F and we were chilled. 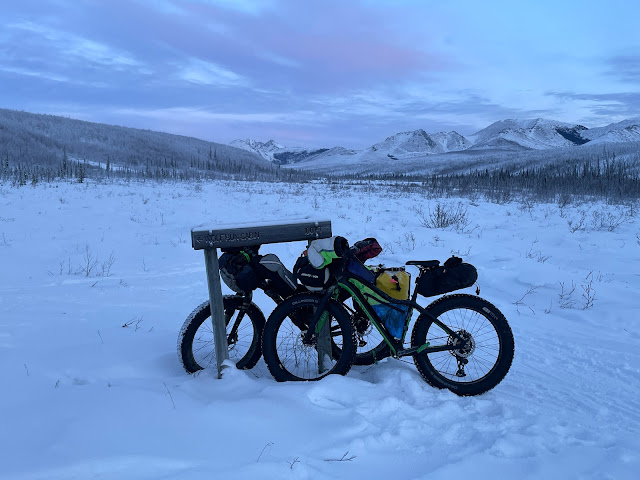 This is when we really realized the advantage of inviting cabin partners who get there ahead of you. It was heavenly to open the door to an already warm cabin! Nate and Christi had hot water and warm stroopwafels ready for a snack! A little while later Nate and Eric headed out on a snowmachine and gathered more firewood using a chainsaw. This was the first time we had traveled with snowmachiners, and we could see the benefits.
The mid-January darkness came early, but with the dark came auroras. And, boy, did they come out! Even as early as 6 PM there were wisps of green in the sky. Christi was so excited. They have too much light pollution at their house to have good aurora views. She kept telling us to come outside and look at them. Eric and I have gotten a bit blasé about auroras unless they are really dancing, but at around 10 PM she convinced us to come look. They were spectacular! Swirling and dancing in the sky. We hadn’t seen them that good in quite a while. Even though it was cold we stayed outside enjoying the light show. 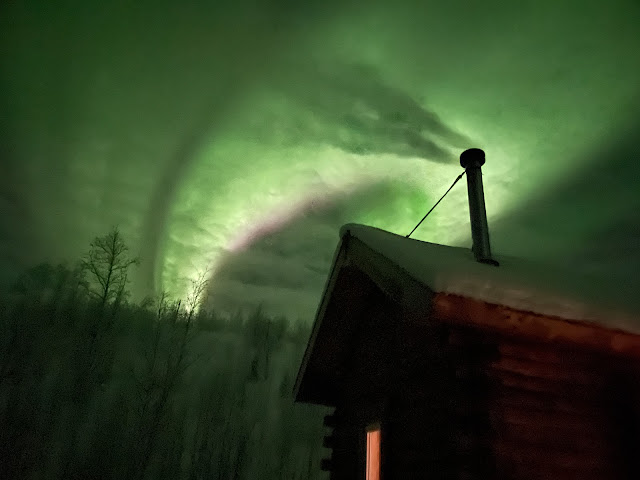 Since it was their first time in a cabin (and they had their friendly-but-spoiled dog), we gave Nate and Christi the bottom bunks while Eric and I decided to sleep in the loft. The upper bunks in the BLM cabins can be narrow and usually have no railing. I feel like I’m going to fall out of bed if I turn over. I probably wouldn’t, but it feels that way. Unfortunately, the loft had its own problems.

I told Nate and Christi that it was the job of those on the bottom bunks to keep the fire stoked. Guess we shouldn’t have left that to first-timers. They were a little overzealous and the cabin was pretty warm by the time we went to bed. In the loft, it was downright hot! The loft had a window, but it was frozen shut. Eric and I felt like we were in a sauna. We slept outside of our sleeping bags in just our underwear for most of the night.

In the middle of the night, I heard Nate open the woodstove.

“Don’t stoke the fire. Let it go out. We’ve been dying up here. It’s finally starting to cool off.”

He seemed a little reluctant but went back to bed without stoking the fire. I didn’t get into my sleeping bag until about 3 AM and didn’t zip up until it just before it was time to get up in the morning. When Nate got up, he stoked the woodstove and we could feel the loft heating up, so we got up quickly.

Outside, the skies had clouded up and the temperature had risen to about zero, but the wind had also picked up – probably 15-20 mph with gusts. Fortunately, it would be a tailwind. 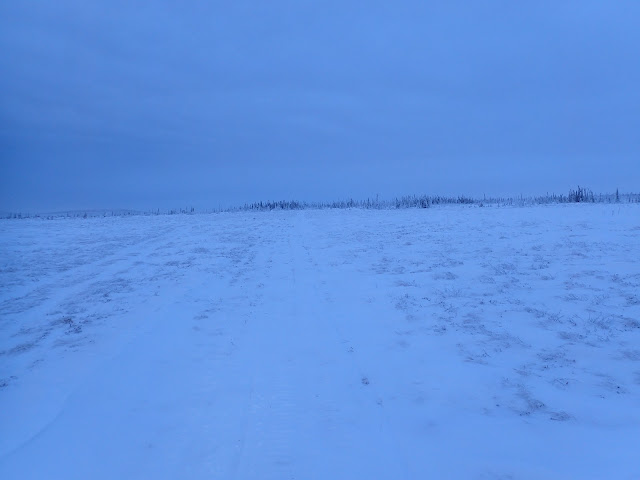 After breakfast, Eric and I packed up and hit the trail while Nate and Christi went for a snowshoe. With that strong tailwind, Eric and I felt like we had e-bikes. Wheeeee!!! I’m pretty sure we rode faster going uphill on that trail than we did riding it downhill the day before. 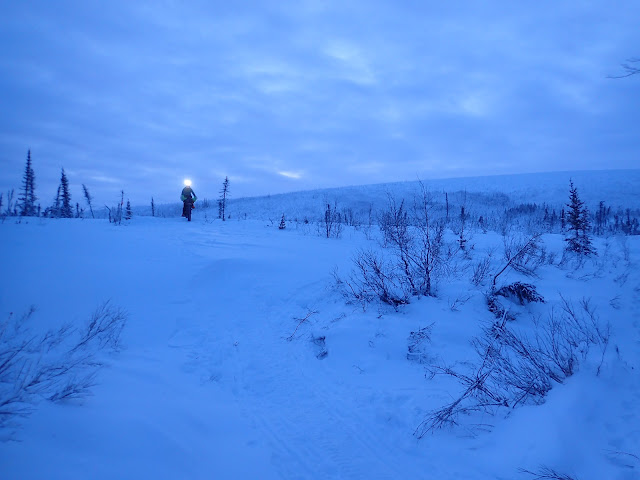 When the trail turned northwest, our tailwind became a crosswind and drifts covered the trail. We were on and off our bikes for a bit, but after we got through the exposed areas, it was pretty much downhill on good trails all the way back to our car. And we lost the wind when we descended to the valley. 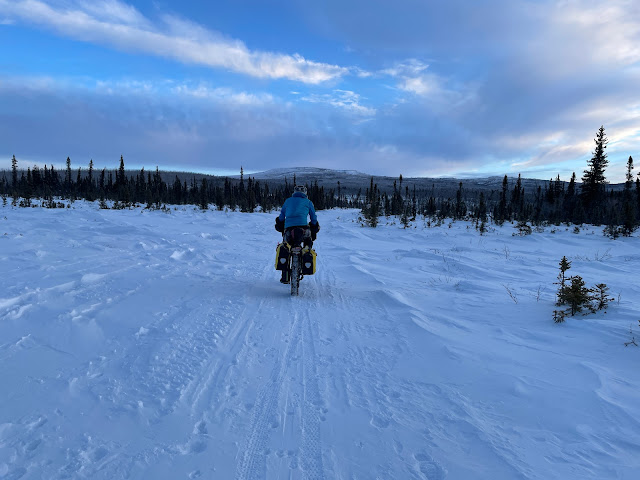 Even with the cold and the wind, it was another great weekend in the Whites. The auroras were a big plus. And it was fun to introduce our friends to the joy of BLM cabins. Nate and Christi are hooked. Maybe next time we can invite them and get them to carry all our camping gear, too! 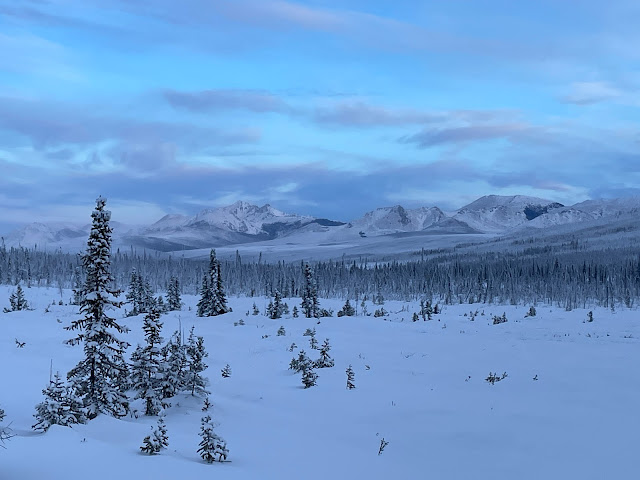