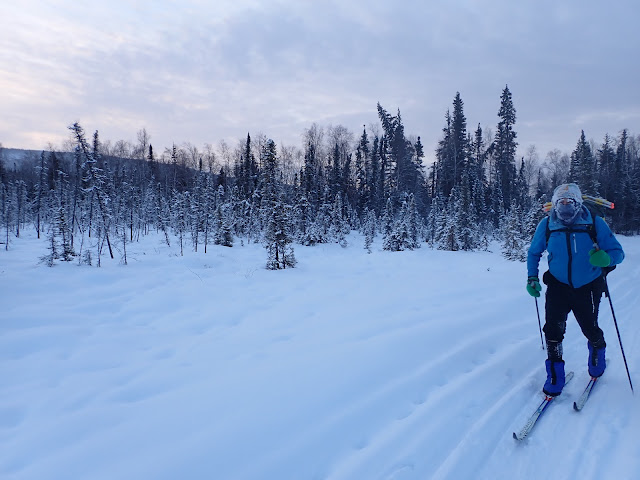 This was not a trip for lots of lingering.

We didn’t linger at the Mile 57 Elliott Highway trailhead when heading into Colorado Creek Cabin. It was more than 25 below (Fahrenheit)! We didn’t linger along the trail when we stopped for snacks or to scrape ice off our skis. Lingering at the cabin had to wait, as there wasn’t much usable firewood to start a fire. Heading out the next morning in darkness, wind, and snow didn’t encourage a lot of lingering either. 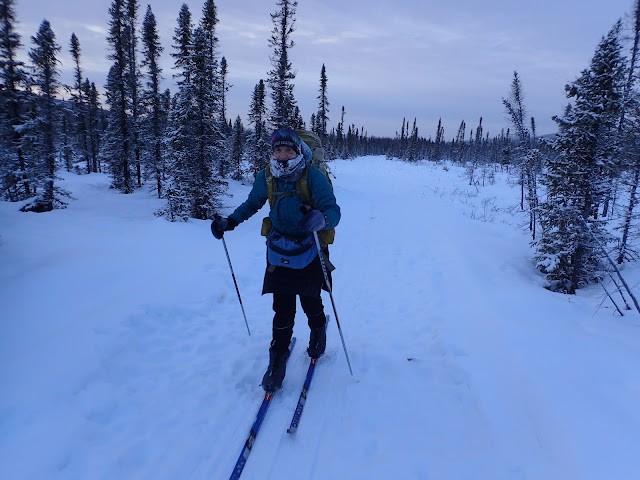 Fortunately, once we collected enough firewood and got a fire started in the cabin -- and got four people’s iced-up clothing hanging to dry and gear stowed in some sort of semi-organized explosion – we were finally able to linger. Ahhh!!!

Jill and Beat again traveled to Fairbanks for a Christmas holiday with us. Ultra-endurance athletes who really enjoy winter races, they have completed the Iditarod Trail Invitational to McGrath and/or Nome several times. Jill has biked and walked while Beat prefers walking. They visit us over the holidays for some winter training. They live in Boulder, but Colorado has not seen much snow in December the past few years. Fairbanks is the perfect place to experience consistent snow and subzero temperatures. They have been visiting us for years (except for 2020 due to COVID) so it’s become a Christmas Tradition. We even hang Christmas stockings for them! 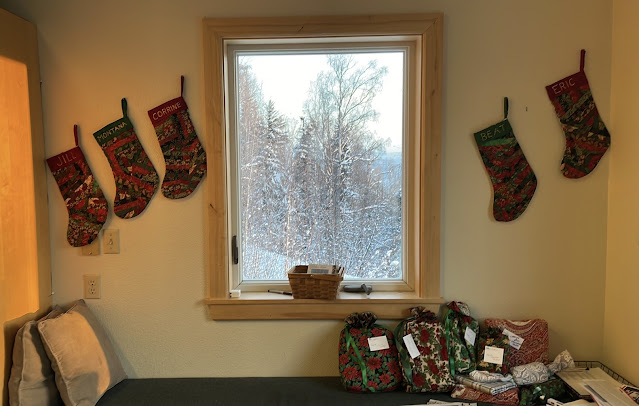 As part of the tradition, we try to accompany them on at least one cabin trip in the White Mountains National Recreation Area. This year I had a 3-day weekend for both Christmas and New Year’s. So, a month earlier, Beat and I planned out trips to Colorado Creek and Wolf Run cabins over Christmas and to Cache Creek Cabin (and maybe Richard’s) for New Year’s. 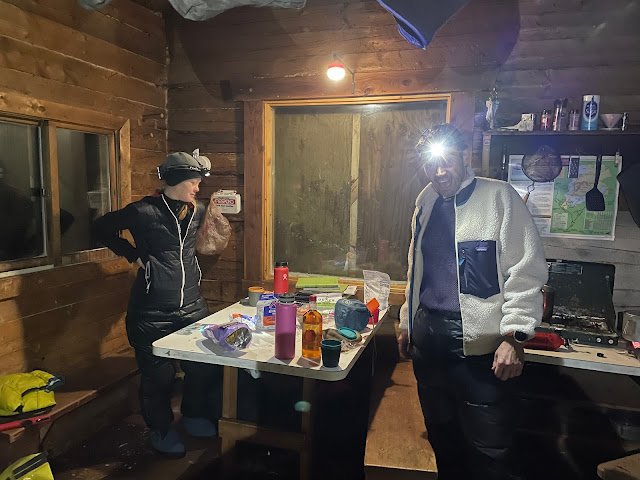 The forecast was looking interesting. Cold temps but then warming and a possible snowstorm right around the time of our first cabin trip. As December 24 got closer, the forecast got more epic. Snow, up to a foot-and-a-half followed by freezing rain, starting the evening of the December 25. Yikes! We decided to just do an overnight to Colorado Creek Cabin, so we could get home before the mega-storm started. From trail reports, we predicted a soft trail, so Eric and I opted for skis instead of bikes. Jill and Beat would be walking while dragging sleds. 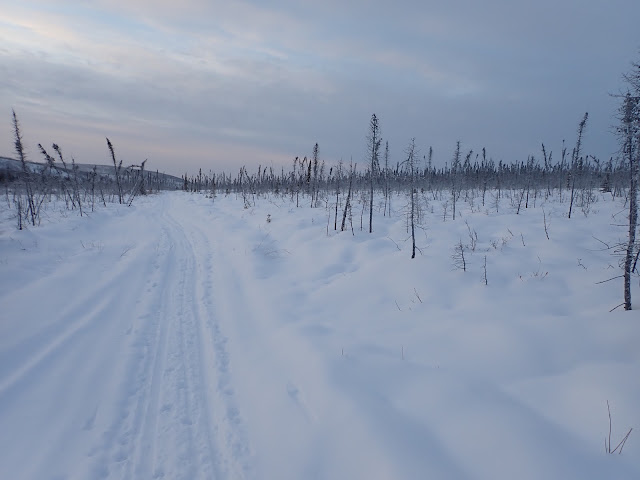 Jill was still not sure how her back would do pulling a sled. In mid-October she had been hit by a truck while biking. Somehow, she got away without serious injuries, but she did have a stiff, sore back. She has been doing PT and stretching, which helped, but she was still pretty stiff. I had her see one of our osteopaths, who does manipulative medicine, and that seemed to help more. She ended up doing fine on our trip with just some soreness, but more from not having dragged a sled for a while rather than from her accident. 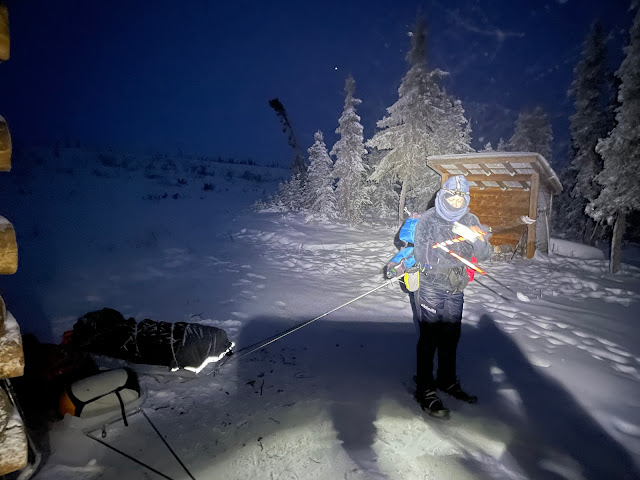 We were able to squeeze in a bit of Christmas before we left. On the evening of December 23, we had a Zoom get-together with our kids, where we chatted and opened presents. Jill and Beat joined in, complete with Santa hats! Then it was finish packing and get to bed.

We were out the door by 9 AM Christmas Eve morning. The Elliott Highway has a lot of uneven snowpack, so the slow, bumpy drive to the trailhead took about 90 minutes. We knew the start would be chilly, but the car thermometer had risen to a high of -9F on some parts of the drive. Maybe it wouldn’t be so bad.

But the Mile 57 Elliott Highway Trailhead is in a low spot. It was -26F at the trailhead. We got going quickly, sort of. We had little glide at that temperature. (It took us 5 hours to go 14 miles.) Fortunately, temps warmed during the day and as we climbed to the cabin, where it was a balmy -10F. Dressed properly, we were comfortable while skiing, but we didn’t linger. The only time I got cold was when I had to scrape ice off my skis after going through some overflow. 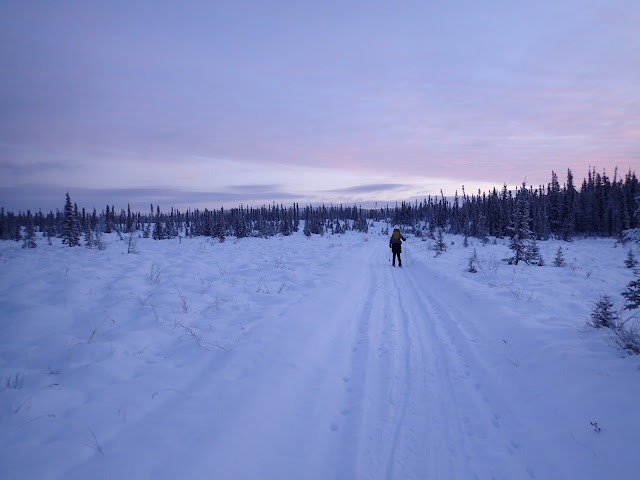 I have been to Colorado Creek Cabin three times, but this was my first time skiing the trail. It’s not a bad ski, but long sections aren’t that interesting. And cloudy skies meant we didn’t get the beautiful sunrises and sunsets we normally have this time of year. Eric listened to Jill's latest book, Into the North Wind, her epic tale of winning and breaking the women's record on her bike to Nome.  It made our adventure seem paltry by comparison but it helped the miles fly by.  I started listening on my ski out.  I would highly recommend listening to this audiobook.  It's a great adventure story. 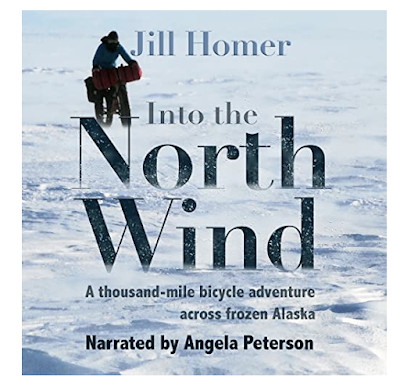 About three miles before the cabin, the trail has a long climb with some narrow, steep sections made even more challenging by the thick, choking alders along the sides. I finally took off my skis to walk a couple of the hills, trying to not get whipped in the face by all the bushes. Fortunately, those sections weren't too long, so we were soon skiing again. 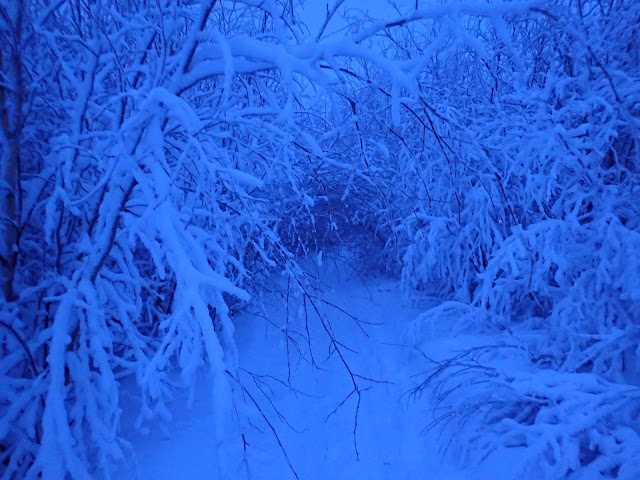 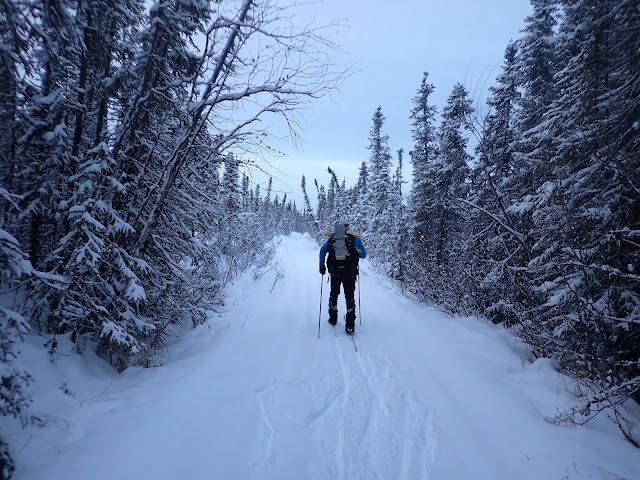 We got to the cabin before Jill and Beat, arriving just as darkness was descending. We were happy to arrive but not happy to find there was not enough wood to start a fire, just several very large rounds that needed splitting and not enough for the night. Eric donned his snowshoes and quickly brought back a load of dead, spindly trees. While I sawed those up and started the fire, Eric headed out for more wood. He made several trips, gathering more than we actually needed. The next people to the cabin will be very happy!

Beat then Jill arrived about 30 minutes later, while Eric was still gathering wood. Jill helped haul some wood. Beat split some of the big firewood rounds and started the Coleman lantern with his propane canister, but after a few minutes, flames started coming out the side. He grabbed the lantern and threw it outside. Yikes! Luckily that was our only bit of excitement for the trip.

We got the cabin toasty warm, hung our wet gear, melted snow, and then finally kicked back for the rest of the night. Beat shared his large bottle of Fireball whiskey (dragging a large sled is good for bringing all the comforts of home!) so we enjoyed that with hot chocolate before making our dinner of freeze-dried meals. Eric entertained us with a book of dumb jokes and riddles on his phone. Jill ended up being the queen of riddles. (What do you get when you cross a snowman with a vampire? Frostbite!) 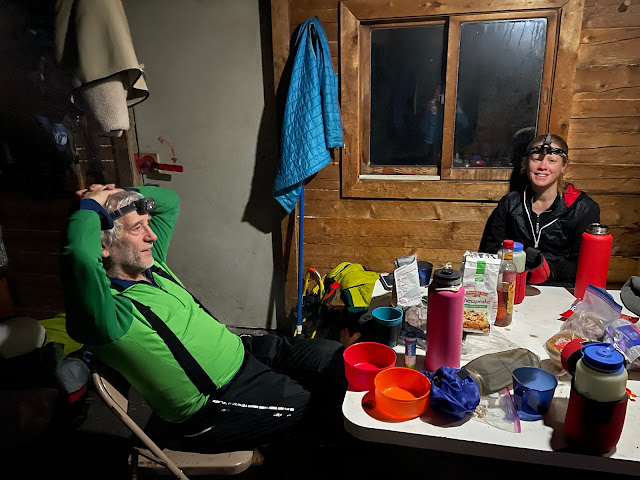 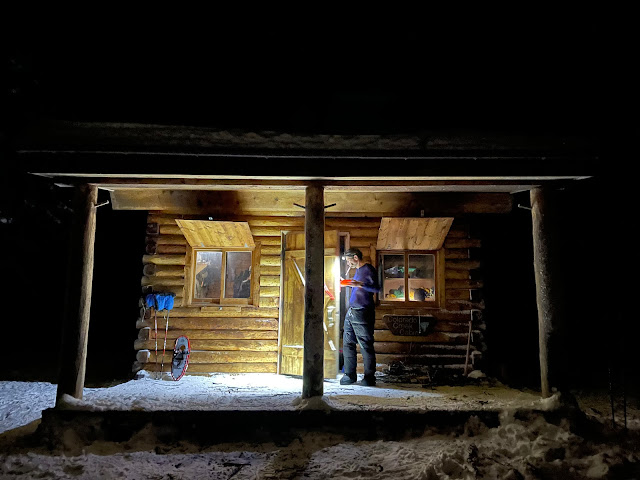 Heading Out, Looking Ahead

The next morning was warmer (around zero F) but also snowing and blowing with over an inch of new snow on the ground. We headed out in dark and blowing snow, wanting to be off the roads before the forecasted storm (with freezing rain) descended. Fortunately, the warmer snow made for better glide for Eric and me, and the downhills were less scary with the new snow. Eric skied all the alder choked steep hills with minimal crashes. I, on the other hand, smartly took off my skis and walked the worst one. 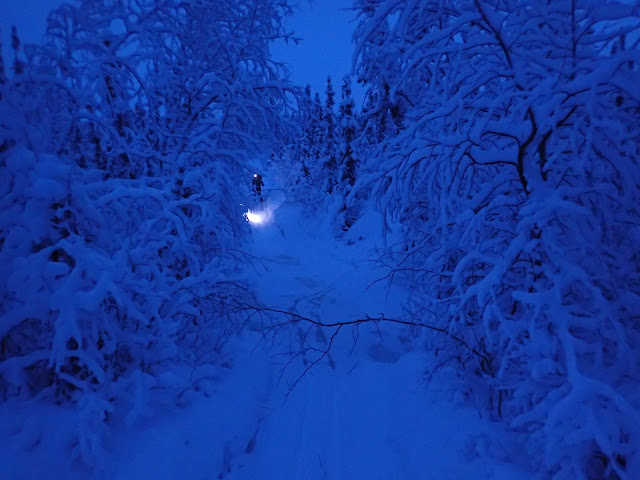 The ski out was uneventful, and we made it back to the car in an hour less time than skiing in. 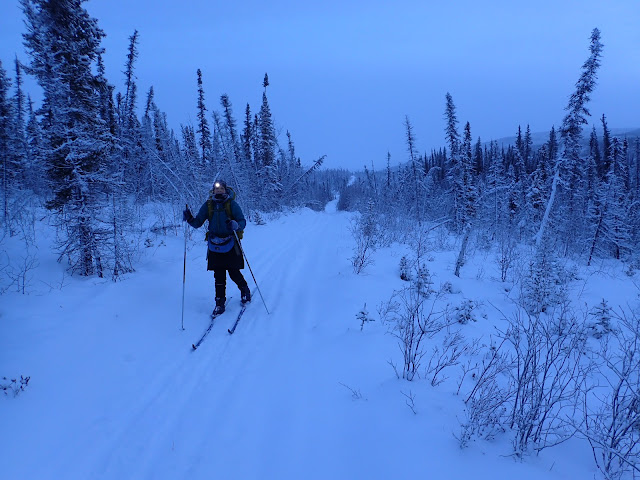 The roads were a bit worse with the new snow, but we made it back without any problems. As I’m writing this, we’ve had nine inches of snow and now it’s raining. I’m glad I don’t have to go anywhere today!

We have another trip planned to Cache Creek Cabin over New Year’s Eve. We’ll see what Mother Nature brings us. Hopefully, we will make that trip, too. It’s always fun doing cabin trips with friends. Even if they start lantern fires or tell really dumb jokes! 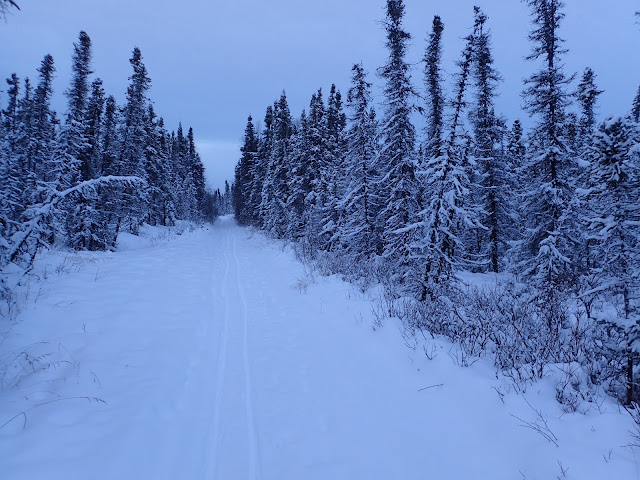 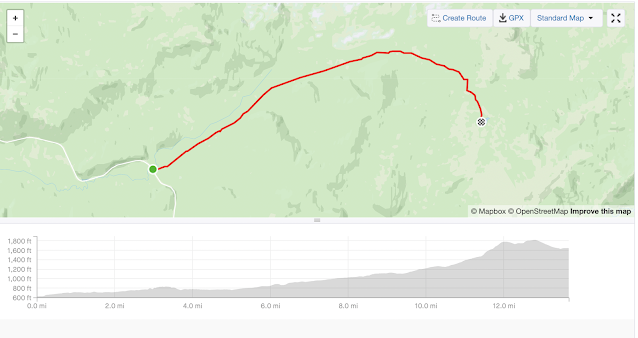 Posted by Corrine and Eric at 5:27 PM