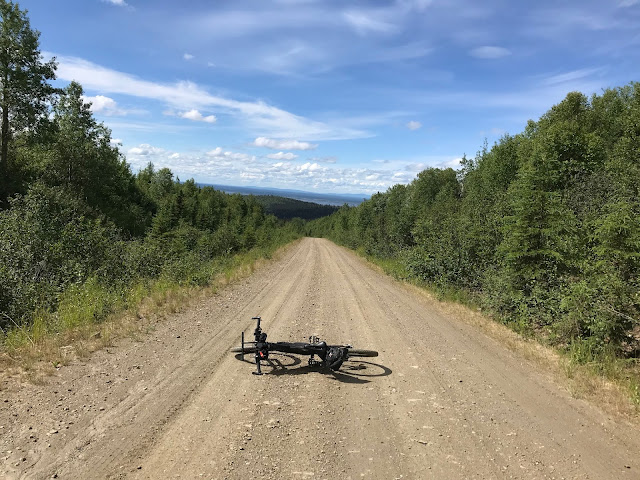 I had planned on biking to Circle over Solstice weekend, but the weather was pretty iffy, and I decided I didn’t want a wet, muddy ride.  (Spoiler alert – I got one anyway!) So, I decided to do a long bike ride with lots of elevation gain closer to home. I love the bike from the top of Murphy Dome to the Chatanika River and back, and I decided to do that starting from home.  I had done the ride a couple of years ago while training for the Tour Divide.  It’s a perfect training ride for anybody considering biking the Great Divide Mountain Bike Route or racing the Tour Divide.  The terrain is very similar. Long uphills and downhills on gravel roads that are good to chunky.

I didn’t get a super early start, but I figured I’d be home by dinner.  I decided to head up Cache Creek Rd to Sherman and make my way up Murphy Dome that way.  More interesting and less traffic.  The bottom part of Cache Creek was super muddy due to recent rains but improved the further I climbed.  Near the top I saw a fox kit that was very curious about me.  By the time I hit Murphy Dome Rd again my legs were tired.  I contemplated just biking to the top of the Dome and then heading home.  Did I really want to drop all the way down to the river and climb back up?

Why was I doing a long bike ride with tons of elevation anyway?  I’m not going to be able to do the Trans South Dakota in mid-July and I’m not even sure if the Dirty Kanza will happen in September.  So why am I training?  I think about this a lot.  Why do I like to do all day bike rides instead of just 2-4 hour rides?  Is it that I like to feel strong?  Is it for bragging rights that I’m so tough?  Is it so that I can eat whatever I want without worrying about my weight?  I know that a lot of long-distance athletes use exercise as a way to deal with depression or anxiety.  But fortunately, I am not plagued by either of those.  I think I just really like to be physically active out in nature.  Moving in the natural environment makes me happy and content.  Much happier than checking chores off my to-do list.   Studies have backed up this feeling that being out in nature is good for us.  And I feel a sense of personal accomplishment when doing something tough and challenging.

Enough navel gazing, time to ride the ridge and drop down to the Chatanika River.  It’s such a great ride. The road is in fairly good shape with some wet spots and chunky areas but all very bikeable.  Definitely doable on a gravel bike. There are great views while riding along the ridge and even as you drop down to the river. The road was a little wetter down low but all in all, it was a really fun descent.

Near the river I saw a groundhog scurry across the road. It was too fast to get a photo. I ate a quick lunch at the river while watching a man and his son load their boat to work on a building project at their cabin 12 miles upriver. Then I turned around to start the long grind back up to the ridge and Murphy Dome Road.  And a long grind it was.  It was hot and sunny with no breaks. I just got into a lower gear and kept turning the pedals.  As I was nearing the high point, I noticed the build up of ominous dark clouds approaching from the north and heard a lot of low rumbling thunder.  I could look over and see that Murphy Dome was getting dumped on.  I decided to stop and see what the storm was going to do.  Could I avoid the rain?  Or at least the thunder and lightning? It seemed to be moving more south and I was headed a bit to the northwest.

After about 15 minutes, I decided to keep going knowing that I would probably hit the tail end of the storm.  And I did. About 3 miles from Murphy Dome Road the rain started. I put on my rain gear and kept riding as I got wet.  I had a teeny bit of hail but no lightning. It continued to rain for about an hour which made for a very, very muddy, gritty descent on the gravel part of Murphy Dome Road. Dirt was flying everywhere.  I could barely see out of my glasses which also weren’t doing that good a job of keeping the grit out of my eyes, either.  I regrouped when I hit the pavement, cleaned my glasses so I could see, and called Eric who was going to pick up Thai food for dinner.  And then headed for home.  The 800-foot climb up our road was a lot slower than usual due to tired legs but I made it home before more rain started!  I washed the grit off my bike, then off myself before enjoying a good Thai dinner with my feet up.
A great day for a fun ride.  80 miles, 8500 feet elevation gain.